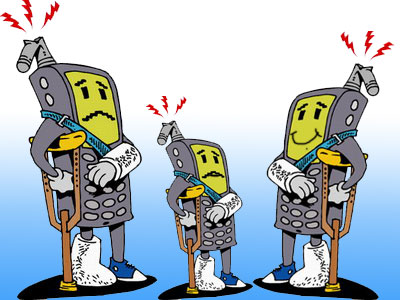 Most of us have been plagued with a blue screen of death, a laptop that refuses to connect to a home wireless network, or a cell phone that just doesn’t feel like making calls.

About 48 percent of technology users have encountered such problems with their devices in the last year, according to a Sunday report from the Pew Internet & American Life Project. How do they deal with these technological meltdowns? Most turn to customer support or just tinker with the devices themselves.

Of the more than 2,000 people surveyed last year by Pew, about 38 percent of them said they contacted customer support for help with a bad Internet connection, computer, or cell phone, while 28 percent fixed the problem on their own.

About 15 percent asked friends or family for assistance, 2 percent found help online, and another 15 percent could not fix the problem at all.

What technology caused the most headaches?

Internet connections. About 44 percent of home Internet users reported having their Web connection fail in the last year.

Also causing problems were computers, with 28 percent of respondents reporting a malfunction in the last year, followed by 21 percent of cell phone users, 2 percent of people with PDA’s like the BlackBerry, and 3 percent of those with MP3 players like the Apple iPod.

People who encountered computer trouble were most likely to fix it themselves, with about 29 percent contacting customer support. Internet and cell phone troubles were not as easy to troubleshoot, with 45 percent and 43 percent of people turning to user support, respectively.