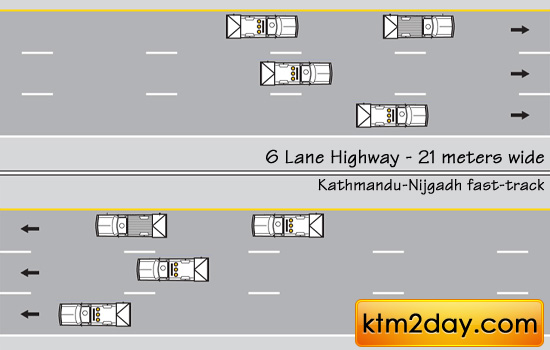 Construction of the Fast Track road to link Kathmandu with Terai districts is going on at full speed. As of now, the track opening of 19-kilometer section of the 76-km road from Khokana, Bungmati and Hadudole of Lalitpur to Kulekhani, Dovan, Dedre, Budne and Sripur of Makwanpur and Nijgadh of Bara has been completed.

The Nepal Army (NA) is undertaking the construction of the road touted as North-South Fast Track link after its foundation stone was laid on November 8 last year. Its total cost is expected to be between Rs 5.5 billion and 6 billion. The NA, currently setting up security camps in Malta, Surya Dovan, Budne and Cheppre of Lalitpur, is speeding up construction works, targeting to complete it within the next three years. Along the 29-km section between Lalitpur and Thingana of Makwanpur, 1.3-km-long tunnel needs to be constructed and more than 10,000 trees of 750 community forests would need to be cut. Out of the total 76 km, bridges alone cover 8-km section. As many as 150 bridges need to be built in separate places.

According to the army headquarters, 2,000 army personnel have been mobilised to build the road. The Fast Track, which is very short, compared to Kanti Highway (200 km), Tribhuvan Rajpath and Pritivi Highway (295), is expected to contribute greatly to the development of the country. Once the construction is over, Nijgadh can be reached from Kathmandu within just one-and-half hours and it will be the most reliable road between Kathmandu and Terai. The construction of the fast-track is not only bringing a new hopes to the Bara district alone, but to the entire mid-Terai region. The Fast Track will also give a boost to the government’s policy of shortening the distance between the under construction international airport in Bara and other areas.

Vehicles plying on the Fast Track are required to pay certain amount as road toll. The army has highly prioritised the participation of local people during the course of road construction by launching income generation programmes aimed at directly benefiting them.

However, construction work is getting jolts time to time due to the failure to distribute money to people in lieu of land acquisition.

The District Administration Office of Makwanpur had repeatedly written to the Ministry of Physical Planning and Works (MoPPW) to release Rs 50 million to pay compensation for land acquisition, but the ministry hasn’t released any money as yet.

According to a preliminary report prepared two years ago, 138 bigha of land should be acquired to construct the road and Rs 350 million is required to pay compensations.

The Finance Ministry authorised the army to spend Rs 750 million in 2066-67. The ministry has been proposed to release Rs. 2 billion for the road construction this year. Though the preliminary estimation of the road came between Rs 55-60 billion, the Asian Development Bank is learned to have been conducting another preliminary study to determine the ways to reduce the total cost.