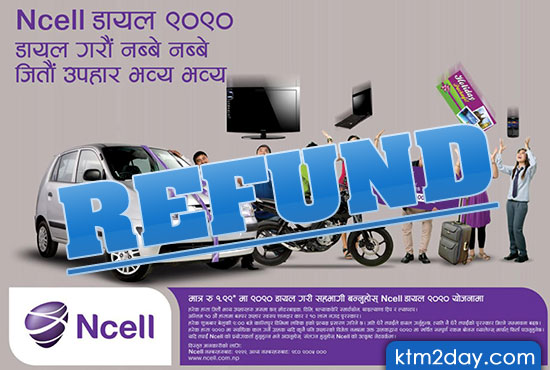 Ncell said Monday that it will be refunding its subscribers who participated in the Ncell Dial 9090 lucky draw campaign after the campaign was suspended on Tuesday last week after Nepal Telecom Authority (NTA) raised questions over the tariff it charged against authority´s regulation.

The campaign was suspended after just five days into it.

“We are preparing to give the money back to our customers who participated in the scheme,” Corporate Communication Manager of Spice Nepal Sanju Koirala said.

The permitted tariff for Spice Nepal is set at Rs 1.99 per minute (not including taxes), whereas the company had set a charge of Rs 2.47 (inclusive of tax) for 10 seconds for the campaign.

“We are currently in discussion with NTA officials and if the outcome is positive, we plan to resume the service,” Koirala told myrepublica.com.

Sources said that more than 500,000 subscribers had participated in the campaign during the five days it was conducted. Ncell is currently checking its database to find out the amount spent by its customers in order to refund their money.

Koirala further informed that the money will be returned within a few days and those who are to be refunded will be notified through SMS.