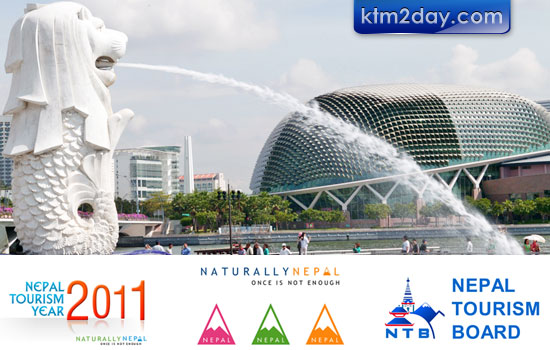 ITB Asia is a B2B meeting, which provides a platform for finding the new avenues for spreading the business and networking further. It was organised by Messe Berlin (Singapore) Pte Ltd and supported by the Singapore Exhibition & Convention Bureau.

The event featured hundreds of exhibiting companies from the Asia-Pacific region, Europe, the Americas, Africa and the Middle East, covering not only the leisure market, but also corporate and MICE travel.

Honorary Consul General of Nepal in Singapore M N Swami highlighted the tourism attractions of Nepal during a press conference on October 21. Nepal Tourism Board officials and NTB PRR in Singapore Narayan Bahadur Shrestha briefed the international media about the national campaign Nepal Tourism Year 2011 and its rationale. Media and international operators appreciated the slogan ‘Together for Tourism’ and praised the commitment made by all the stakeholders in Nepal toward the success of national campaign.

During the meeting with the international buyers, most of them inquired about the NTY 2011 and its preparations. Buyers from Australia, Middle East, Philippines, Indonesia are enthusiastic to operate the tour in Nepal. The Nepalese Travel Trade participants briefed the buyers about the special attractions of Nepal’s adventure activities, eco-tourism, homestays and pilgrimage tours.