The country has in no uncertain terms gained for itself the dubious distinction of being one of the most corrupt countries in South Asia.

With a score of 2.2, Transparency International (TI) has placed Nepal 146th out of 178 countries that were surveyed and ranked in its Corruption Perceptions Index (CPI). TI made public its annual report today from its headquarters in London and other countries simultaneously.

The report states political instability, lack of political will and ineffective anti-corruption initiatives are the major factors considered in the CPI’s ranking system.

Corruption in public offices, level of corruption, action against corruption and its output, government anti-corruption initiatives, administrative corruption, political corruption, bribing in import and export, and irregularities in contract awards have all contributed to making Nepal one of the most corrupt nations in the region. 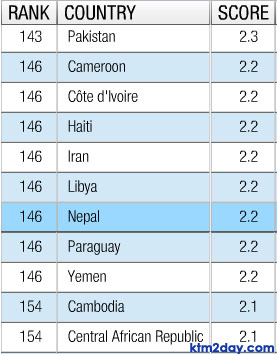 “This is the result of lack of rule of law, breakdown of the constitution, dysfunctional House and an almost defunct government,” Shree Hari Aryal, general secretary of TI Nepal, said.

The report ranked war affected counties such as Somalia with a score of 1.1 as most corrupt, followed by Myanmar obtaining 1.4 and Afghanistan 1.4 and Iraq 1.5.

According to the report, Denmark, New Zealand and Singapore are the cleanest countries with 9.3 scores.

Corrupt states at a glance

• Most corrupt nation in the world – Somalia

• Cleanest country in the world – Denmark