Tourist inflow to Nepal reaches an all-time high in 2010 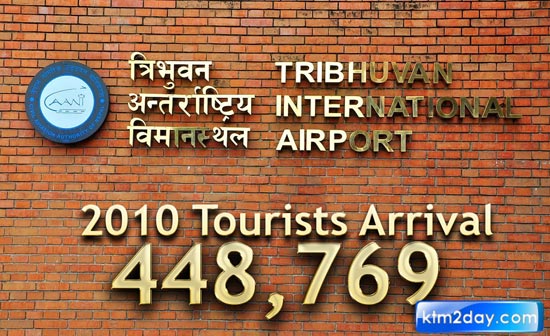 The country entered Nepal Tourism Year on Saturday and the buzz is that tourism stakeholders will get a much needed boost. The Nepal Tourism Board (NTB) on Sunday announced that arrivals by air in 2010 had reached an all-time high of 448,769 tourists.

This is first time in 12 years that tourist arrivals have crossed the 400,000 mark. The last time that Nepal had received so many tourists was in 1999 when 421,243 tourists came to the country.

After a high of 1999, tourist arrivals in Nepal started to slump, first by the 9/11 attack and then by the escalation of the Maoist conflict in the country. Tourist arrivals continued to slide for three straight years — from 2000 to 2002. Though there was a slight improvement in 2003 and 2004, arrivals again declined in 2005 then King Gyanendra took over direct rule. It was the peace agreement between the government and the Maoists that arrested this slump in 2006. Post-2006, the tourism sector has bounced back with a gradual upward movement of tourist arrivals.

The NTB data shows that arrivals have increased by 18.5 percent last year. Of the total arrivals, India tops the chart with 104,470 tourists followed by the US, the UK, China and France. There has been positive growth in the Asian segment, the European segment and the Americas, according to the NTB.

Though Indians are traditionally make up the largest number of visitors to the country, what is most promising for the domestic tourism market is a sharp increment in the arrival of Chinese tourists. Chinese tourist arrivals have jumped by an encouraging 36.8 percent in 2010, indicating that it is becoming one of the top markets for Nepal’s tourism. According to NTB data, a total of 25,559 tourists from China visited Nepal last year, up from 18,677 of 2009.

Hence, architects of NTY 2011 have understandably given greater priority to India and China and projected them as major source markets. The NTY Implementation Committee has targeted 265,000 tourists from India and 100,000 tourists from China in 2011. One challange to bring more tourists is expensive air fare. “Airfares from China to Nepal are among the world’s expensive fares and driving distance is also long,” said Rajendra Bajgai, general secretary of the Trekking Agents Association of Nepal.(Source:ekantipur)