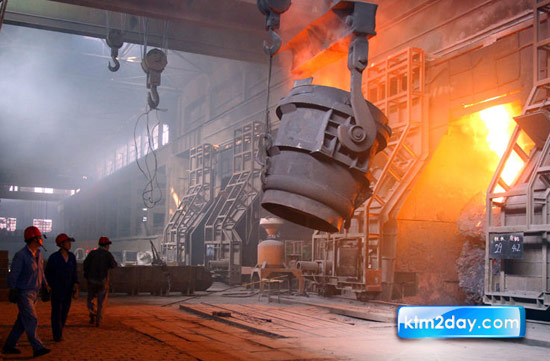 Iron and steel products, yarns, woollen carpets, readymade garments, lentils and textiles, in that order, topped the list of exports from Nepal in the first 10 months of the fiscal year.

The export of yarns, woollen carpets, lentils and readymade garments registered a double-digit growth during the review period compared to the same period last year. Exports of iron and steel products rose 1.2 percent while textile exports plunged more than 11 percent.

Udaya Raj Pandey, president of the Garment Association Nepal (GAN), said the export performance was not satisfactory compared to past years. “The country’s manufacturing sector is still suffering from a shortage of workers and security problems,” he added.

The countrsy’s total exports amounted to Rs 52.11 billion during the review period, up 4.8 percent from last year. While exports increased marginally, imports jumped 9.8 percent to Rs 313.87 billion, leading to a 10.9 percent increase in the trade deficit, according to the TEPC.

Meanwhile, imports of motor vehicles and machinery parts recorded a drop. Pandey attributed the fall in the import of machinery parts to a contraction in the country’s industrial sector.

“Many factories have shut down of late which has resulted in a decline in the use of machinery parts.”

India, Bangladesh and the US were the top buyers of Nepali products this year, importing Rs 34.07 billion, Rs 3.30 billion and Rs 3.09 billion worth of goods respectively. Exports to Turkey and Bangladesh rose the most. According to the TEPC, exports of polyester yarn to Turkey and of lentils to Bangladesh have increased significantly this year.

However, exports to China and Bhutan registered a drop. “Exports of wheat flour and vegetable ghee to China and of iron products, transformers and noodles to Bhutan declined during the period,” said Suyash Khanal, director of the Statistics Department, TEPC.

Meanwhile, India, China and Argentina were listed as the main source countries for imports. Nepal imported goods worth Rs 213.71 billion, Rs 32.31 billion and Rs 6.71 billion respectively from these three countries. “The import of agricultural products including crude soybean oil from Argentina has increased significantly,” added Khanal.