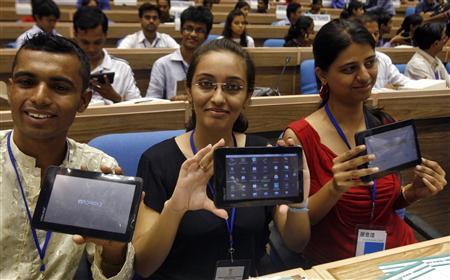 (Reuters) – India launched what it dubbed the world’s cheapest tablet computer Wednesday, to be sold to students at the subsidized price of $35 and later in shops for about $60.

Most of India’s 1.2 billion people are poor and products such as Apple Inc’s iPad are beyond the reach even of many in the fast-growing middle class.

“The rich have access to the digital world, the poor and ordinary have been excluded. Aakash will end that digital divide,” Telecoms and Education Minister Kapil Sibal said.

The government is buying the first units of the lightweight touch-screen device, called Aakash, or “sky” in Hindi, for $50 each from a British company which is assembling the web-enabled devices in India.

A pilot run of 100,000 units will be given to students for free, with the first 500 handed out at the launch to a mixed response. It supports video conferencing, has two USB ports and a three-hour battery life but some users said it was slow.

India has a reputation for creating affordable products that are easy to use and sturdy enough to handle its rugged environment — from Tata Motors’ $2,000 Nano car to generic versions of pharmaceuticals.

Two years in development, the paperback book-sized Aakash may help the government’s goal of incorporating information technology in education, although critics were doubtful of its mass appeal. 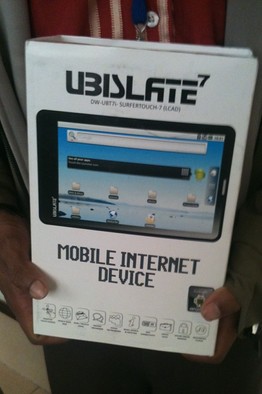 Despite being a leader in software and IT services, India trails fellow BRIC nations Brazil, Russia and China in the drive to get the masses connected to the Internet and mobile phones, a report by risk analysis firm Maplecroft said this year.

The number of Internet users grew 15-fold between 2000 and 2010 in India, according to another recent report. Still, just 8 percent of Indians have access. That compares with nearly 40 percent in China.

The Aakash is aimed at university students for digital learning via a government platform that distributes electronic books and courses.

Testing included running video for two hours in temperatures of 48 degrees Celsius (118 degrees Fahrenheit) to mimic a northern Indian summer, said DataWind, the small London-based company that developed the tablet with the Indian Institute of Technology.

Rajat Agrawal, executive editor of gadget reviewers BGR India, said the 660 mhz processor from U.S. company Conexant Systems was “decent” for the price, but warned the machine seemed slow and the touch screen not very agile.

“Because of the price there is a lot of excitement,” he said. “People might use it initially but if it is not user friendly they will give up within a week.”

After first giving them out for free, the government aims to sell them to students for $35 next year. A retail version will be sold in Indian shops for about $60.

The launch last week of Amazon’s Kindle Fire shook up the global tablet market, with its $199 price tag and slick browser a serious threat to Apple’s iPad.

Like the Kindle Fire, the Aakash uses the Google Android operating system.

Some of the mainly middle-class technology department students at the event said it needed refinement but was a good option for the poor.

“It could be better,” said Nikant Vohra, an electrical engineering student. “If you see it from the price only, it’s okay, but we have laptops and have used iPads, so we know the difference.”

Some 19 million people subscribe to mobile phones every month, making India the world’s fastest growing market, but most are from the wealthier segment of the population in towns.