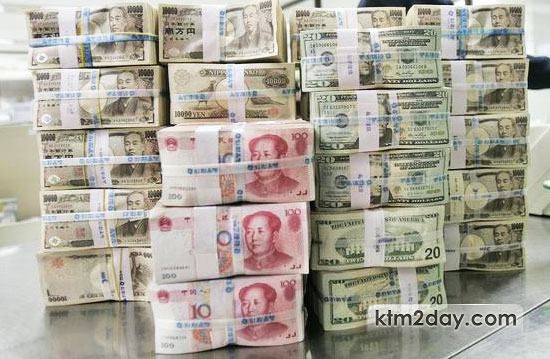 With the swelling foreign exchange reserves, the richer Nepal can afford to buy more merchandise from abroad to feed its growing consumerism.

The foreign exchange reserve of the central bank has leapt to Rs 342.74 billion in the first four months, thanks to the whopping surplus in Balance of Payments (BoP).

The gross foreign exchange reserve has increased by Rs 70.5 billion by the mid-November, according to central bank. At the end of last fiscal year, Nepal was holding foreign reserve worth Rs 272.1 billion that went up by 25 per cent over the period of four months of the current fiscal year to Rs 342.74 billion.

“This is the record reserve situation of the recent history,” pointed out spokesperson of Nepal Rastra Bank (NRB) Bhaskar Mani Gyanwali.

The foreign reserve (forex) is an important indicator for the nation’s liquidity and ability to finance imports. Increasing foreign exchange reserve means Nepal becoming richer and its ability to buy goods and services from foreign countries are strengthening, he informed. According to Nepal Rastra Bank (NRB)’s estimation based on trend of import, the current level of forex reserves is sufficient for imports for next 9.1 months — including both goods and services imports. The forex reserve can shoulder the merchandise imports excluding service import for next 10.3 months.

“The changes in foreign exchange rates have been taken into consideration so that in spite of strengthening US dollar the current reserve’s ability to shoulder the imports will not be affected,” expressed Gyanwali.

Nepal is enjoying BoP surplus of Rs 46.31 billion — an enormous leap from the surplus of Rs 2.78 billion at the beginning of the fiscal year — making the country a little richer. The depreciating Nepali currency against US dollar has however did not allow the central bank’s foreign reserve to increase as much as it had done in terms of Nepali rupees. In terms of US Dollar, the gross foreign exchange reserves increased by 10.7 per cent to $4.2 billion in mid-November from $3.8 billion in mid-July 2011.

The foreign exchange reserves are assets of the central bank held in different reserve currencies consisting of the foreign currency deposits including International Monetary Fund (IMF)’s SDR held by the central bank and monetary authorities. It also showcases the ability to repay debts thus it is major influencing factor in determining the credit rating of any nation.

The prolonged deficit Balance of Payments (BoP) in most part of last two fiscal years, Nepal lost a huge chunk of its forex reserve. To meet BoP deficit Nepal had even borrowed amount equivalent to SDR 28.52 million from IMF under its Rapid Credit Facility (RCF). In last five fiscal years, forex reserve in Nepal went through quite a roller coaster ride. It stood at Rs 165.2 billion by the end of fiscal year 2006-07 soared to Rs 279.9 billion as fiscal year 2008-09 drew to close -the jump of entire Rs 115 billion in just two years. However, following the deteriorating BoP of fiscal year 2009-10, the forex reserve declined by about Rs 11 billion.