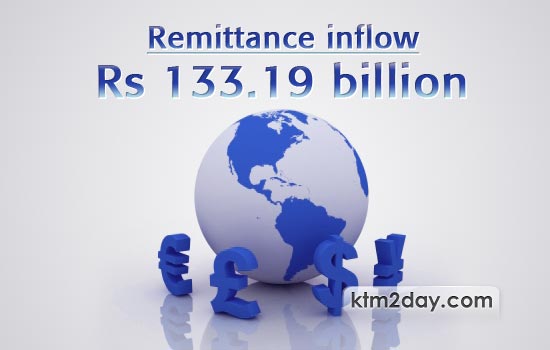 The remittances inflow has seen almost eight times increase in five months to Rs 133.19 billion from Rs 17.7 billion in the current fiscal year.

“Workers’ remittance increased by 37.9 per cent to Rs 133.19 billion in the fifth month of the current fiscal year,” according to the central bank that claimed that the increase has seen a growth of 11.3 per cent during the same period of last fiscal year.

On a monthly basis, the remittance inflows increased by 9.7 per cent in mid-December compared to the value of the a month ago of the current fiscal year.

In US dollar terms, the remittance inflow increased by 30 per cent to $1.72 billion compared to a growth of 14.2 per cent during the same period last fiscal year, revealed Nepal Rastra Bank’s five month’s data.

The increase in the remittance inflow will be equal to over 20 per cent of the gross domestic product (GDP).

Despite the global economic crisis that has impacted private capital flows, remittance flows to developing countries have remained resilient, posting an estimated growth of eight per cent in 2011,” it said, adding that remittance flows to all developing regions have grown this year, for the first time since the financial crisis.

Though the remittance costs continue to remain high, especially in small nations like Nepal, where remittances provide a life line to the poor, according to the World Bank, there is a pressing need to improve data on remittances at the national and bilateral corridor level to more accurately monitor progress towards the ‘5 by 5’ remittance cost reduction objective.

According to the central bank, under transfers, pension receipts, however declined by 19.6 per cent to Rs 10.93 billion.

“Similarly, under the financial account, foreign direct investment (FDI) flow recorded Rs 3.20 billion compared to Rs 3.58 billion in the same period a year ago,” the central bank said, adding that the growth in remittance inflow also pushed the gross foreign exchange reserves by 35.4 per cent to Rs 368.63 billion from a level of Rs 272.15 billion at mid-July 2011, against the declined of two per cent to Rs 263.43 billion during the same period last fiscal year.

However, the central bank claimed that Balance of Payment (BoP) has recorded the highest ever surplus of Rs 61.19 billion during the five months of the current fiscal year compared to a deficit of Rs 3.76 billion during the same period of last fiscal year, though the trade deficit has not seen any narrow down. (Source:THT)