Home » NEWS » Himalayan meltdown not so fast after all: study

Himalayan meltdown not so fast after all: study 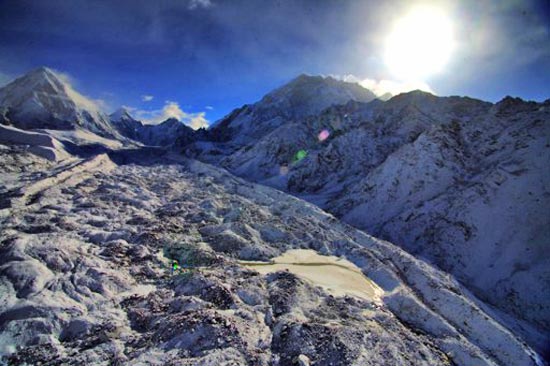 Himalayan glaciers and ice caps that supply water to more than a billion people in Asia are losing mass up to 10 times less quickly than once feared, reports a study published Thursday.

Based on an improved analysis of satellite data from 2003 to 2010, the findings offer a reprieve for a region already feeling the impacts of global warming.

But they do not mean that the threat of disruptive change has disappeared, the researchers warned.

“The good news is that the glaciers are not losing mass as fast as we thought,” said Tad Pfeffer, a professor at the University of Colorado’s Institute of Arctic and Alpine Research and a co-author of the study.

“The bad news is that they are still losing a lot of water. There is still definitely a serious problem for the Himalayas.”

Much of that loss, it turns out, is taking place in the huge plains immediately south of the towering mountain range, where pumping from wells is draining ancient aquifers far faster than precipitation can replenish them.

Earlier estimates — also based on satellite data — mistakenly attributed much of the draining of these water tables to glacier melt-off, Pfeffer said in a phone interview.

Other calculations now thought to be off the mark were based on scaled-up extrapolations from lower-elevation glaciers that were more accessible to observation, but also more subject to warming trends.

“Many of the high glaciers would still be too cold to lose mass even in the presence of atmospheric warming,” said co-author John Wahr, a physicist at the University of Colorado.

The study, published in Nature, provides what may be the most accurate global estimate of how much mass Earth’s frozen regions — glaciers, ice caps and the continent-sized icesheets sitting atop Greenland and Antarctica — have shed over the last decade.

From 2003 through 2010, they collectively lost about 4,200 cubic kilometres (1,000 cubic miles), enough to raise sea levels by 12 millimetres (a half-inch) over that eight year period, the study found.

Most of that increase came from the Greenland and West Antarctica, while only 3.2 mm (0.125 inches) of the total can be attributed to the world’s melting glaciers and ice caps.

“For high-mountain Asia, we are reporting loss of only four gigatonnes (Gt), or four cubic kilometres, annually,” said Pfeffer. “Other studies have reported loss as high as 50 Gt per year. There’s a big difference.”

For the icesheets, however, the new estimates of ice mass loss over the last decade are roughly in line with other measurements based on different methods, the researchers said.

The second major driver of rising oceans is thermal expansion — water taking up more space as the atmosphere heats up.

Satellite data used in the study, published in Nature, was taken from the Gravity Recovery and Climate Experiment, or GRACE, a joint NASA-German effort to measure changes in the planet’s gravity field.

Two GRACE satellites launched in 2002 whip around Earth in tandem 16 times a day at an altitude of about 480 kilometres (300 miles), sensing subtle variations in gravitational pull caused by shifts in mass in ice sheets, oceans and water stored in the soil and in underground aquifers.

The new data will help scientists refine predictions about how quickly sea levels will rise, and by how much.

Current estimates vary between about half-a-metre and a metre by century’s end.

“A better estimate of past behaviour, such as that obtained [in the new study], will therefore result in better estimates of future behaviour,” Jonathan Bamber, a professor at the University of Bristol, noted in a commentary, also in Nature. (Source:Yahoo News)