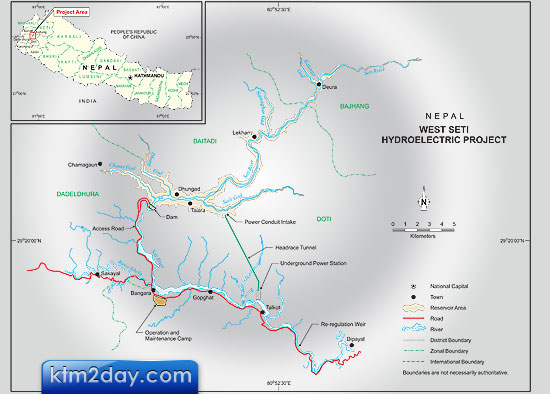 Aims to complete the project by December 2019

Sixteen-year-old West Seti (750 MW) hydro project has got a new developer. The only reservoir project ready for construction located in the far west region will be developed by the China Three Gorges Corporation if a Memorandum of Understanding signed today at the Ministry of Energy gets implemented.

CTG had shown interest to develop the project in May 2011. The Chinese firm had expressed its interest in the project immediately after the government scrapped the licence of West Seti Hydropower Limited which had failed to rope in investors for 16 long years. The MoU was signed today by Energy Secretary Arjun Kumar Karki and CTG Vice-chairman Wang Sabefeng. Chinese Ambassador Yang Houlan and Energy Minister Posta Bahadur Bogati were present.

CTG is the legal entity of the Three Gorges Project (21,000 MW) built on the Yangtze River in China. Estimated cost of the project is between $1.2 and $1.7 billion. Earlier Snowy Mountain Energy Corporation of Australia had signed an MoU with China National Machinery Import and Export Company in December 2010 during then prime minister Madhav Kumar Nepal and then energy minister Prakash Sharan Mahat’s visit to Beijing. But later China Exim Bank had withdrawn its interest to fund the project.

According to sources, a Chinese technical team will arrive in Nepal in the third week of March. The ministry is doing groundwork to get the MoU approved by the Cabinet.

• Project will be constructed for domestic use

• CTG will help NEA to get funds for equity from China Exim Bank. If the received loan is insufficient, CTG will manage additional funds

• CTG will update all technical studies carried out so far on its own. It will also look for funds for the construction of transmission line to link its product to the national grid

• CTG should complete the financial closure of the project by October 2014. Failure to do so will result in scrapping of its licence