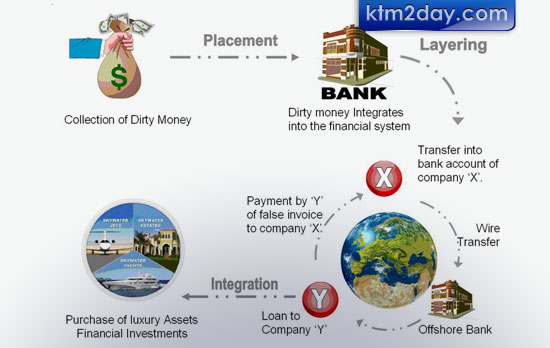 Nepal had avoided being blacklisted by FATF in February amid intense political lobbying at the highest level. ICRG’s Regional Review Group (RRG) that looks into Asia Pacific Region has recently written to Nepal asking the latter to send the report about its progress in meeting the country’s commitment with regard to anti-money laundering after Nepali officials held talks with RRG officials in Australia in January.

“We have been asked to send the progress report within March,” said Baikuntha Aryal, joint secretary at the Finance Ministry. “We have to prepare the report based on the progress made so far which will be discussed at the ICRG meeting to be held in May.” The ICRG submits its analysis to the FATF for discussion and to take decision whether the certain country should be blacklisted or not. The next FATF meeting will take place in June in Rome, Italy.

With the parliamentary session recently concluded and three separate bills-Bill on Controlling Organised Crime, Bill on Extradition and Bill on Mutual Legal Assistance yet to be endorsed by the parliament-Nepali officials fear the country has nothing to show about the progress at the moment. “Till these bills are passed, we have nothing to show as the progress at the moment,” conceded Aryal.

The FATF has warned of blacklisting Nepal frequently as the crucial bills have remained pending despite the country’s pledge to endorse them within 2010. “Now, there is no alternative except passing these bills to save the country from being blacklisted,” said Dharma Raj Sapkota, chief of Financial Information Unit (FIU) at Nepal Rastra Bank that keeps records of the possible money laundering activities.

The FATF has been showing deficiencies in Nepal’s failure to curb acts of money laundering and terrorist financing properly by introducing necessary laws. However, the Prime Minister himself and the government officials have failed to convince a section of the Maoists leaders about the dangers of being blacklisted.

That’s why, Finance Ministry is once again preparing to hold discussion with the lawmakers to convince them about the necessity of endorsing those bills. “We have also discussed with the Prime Minister for holding interaction with the lawmakers about the necessity of passing the bills,” said a senior official of the Finance Ministry. Although Nepal is not in the risk zone of FATF, the country has already felt the heat, with the US banks refusing to entertain Nepali embassy’s accounts in their banks.

He said that although the bank concerned has not explained clearly about its denial to entertain Nepali embassy’s account it looks like the bank concerned is not satisfied with Nepal’s record on anti-money laundering measures. “We are seeking a detail explanation about it,” he added. According to him, the embassy will have to seek another bank to deposit its money.

Citi Bank, which had sought to detach all relations with Nepal, citing low business volumes against the cost involved for doing business with Nepal, had also told Nepali embassy two months ago to close its account. The multinational lender has also told Nepal Rastra Bank and all commercial banks, with which it is involved in corresponding banking, that it is detaching all relations with Nepali government and private institutions.

Central bank officials feel that it is not just cost issue that has driven the Citi to exit from doing any corresponding banking with Nepal. “If it is cost, there are ways to address this issue either by raising fee or raising the minimum balance of nastro account of Nepali banks,” said a senor official of NRB. “Even though they don’t say directly but we sense that they see risk in continuing doing business with Nepali financial system.”(Source:ekantipur)