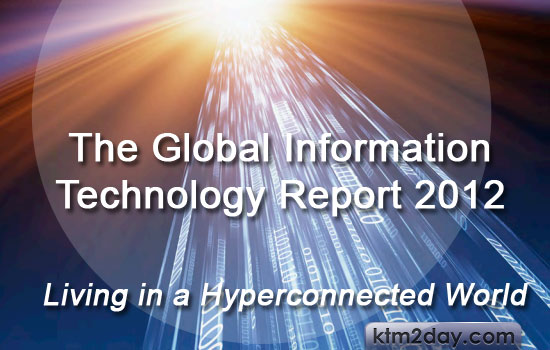 With a score of 2.97, Nepal was ranked 131st among 138 economies in last year’s report. Other South Asian countries like India ranked at 69, Sri Lanka at 71, Pakistan at 102 and Bangladesh at 113 are ahead of Nepal, according to the ‘Global Information Technology Report 2012: Living in a Hyperconnected World’.

The 441-page report by the World Economic Forum (WEF) used a broad range of measures to rank countries on the success of their overall efforts to use such ICT technology to improve business, government and the lives of individuals.

“The digital divide persists between developed and developing countries, even in regions like Europe,” according to the report that examined the success of 142 countries in using information and communications technology to boost economic competitiveness.

ICT is a key precondition for enhanced competitiveness and economic and societal modernisation of nations, as well as an instrument for bridging economic and social divide and reducing poverty. Hence ICT transformation is an absolute necessity for developing countries like Nepal.

But the country has scored less this year as compared to last year.

At the top of the list are advanced economies like Sweden, Singapore, Finland, Denmark, Switzerland, Netherlands, Norway, US, Canada and Britain. At the bottom are many countries of sub-Saharan Africa as well as Nepal, Syria, East Timor and Haiti.

“Despite all the efforts seen in the past, the digital divide still exists between developing countries and developed countries,” associate director of the World Economic Forum’s Center for Global Competitiveness and Performance Benat Bilbao-Osorio, who co-authored the report said, adding that the digital divide can be observed at the regional level too.

Despite extensive work by developed countries to help boost infrastructure of information and communications technologies in developing economies, a serious digital divide still exists, according to research by the World Economic Forum.

The report attempted to measure the transformational impacts of ICT on the economy and society.

“Hyperconnectivity is redefining relationships between individuals, consumers and enterprises, citizens and state, and we are beginning to see fundamental transformations in all areas of the economy and society,” chief business officer at the WEF Robert Greenhill said, adding that traditional organisations and industry infrastructures are facing challenges as industries converge. “It will inevitably have consequences for policy and regulation as regulators will have to mediate the blurring lines between sectors and industries and will be obligated to oversee more facets in a pervasive way.”

The report also showed that ICT deficiencies tend to mirror the trends in economic performance in general.

Each year, the WEF ranks countries on the basis of how they adopt and implement information technology across their economies. The findings are published in the Global Information Technology Report.

The Networked Readiness Index uses a combination of data from publicly available sources, as well as the results of the Executive Opinion Survey, a comprehensive annual survey conducted by the World Economic Forum with its network of partner institutes in the countries included in the report.(Source:THT)