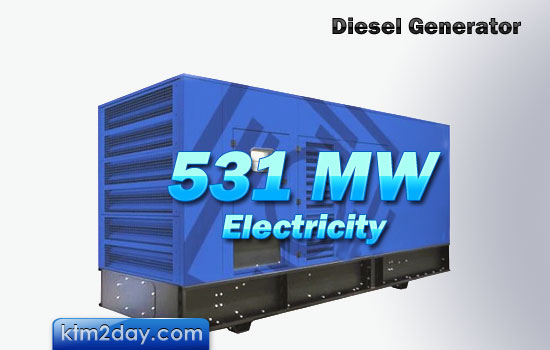 Nepal Oil Corporation (NOC) has claimed that the country has been generating around 531 megawatt (MW) of electricity through the use of diesel.

The country has been facing a 10-hour power outage for years, said acting director general at the corporation Suresh Kumar Agrawal. “Diesel has been used as an alternative energy to generate electricity.”

Around 30 to 40 per cent of diesel has been utilised to generate electricity during load-shedding, he said. “It is a primary estimation that one litre of diesel can produce 3.4 to 4 units of electricity,” said deputy director and engineer at NOC Sushil Bhattarai.

The general demand for diesel in the domestic market is 65,000 kilolitres (kl), according to NOC. “Nepal utilises around 26,000 kl diesel for electricity.” Diesel has been used not only by industries but also by departmental stores, hospitals and big outlets, claimed NOC.

“Almost all outlets in Kathmandu use a generator to generate electricity during load-shedding,” said Bhattarai. “Departmental stores and malls have installed big generators that consume more diesel to fulfill their power needs.”

The government should carry out a study to calculate the real scenario of the energy sector of the country, the corporation said. “The demand for fuel has been increasing due to the sophisticated lifestyle of citizens but the state has no vision about calculating the real data of the energy sector.”

KATHMANDU: Nepal Oil Corporation (NOC) will formally enter the lubricant business soon, said acting managing director Suresh Kumar Agrawal. The petroleum supply agreement which was inked on April 27 has included the trade of bitumen, lubricants and grease between Indian Oil Corporation (IOC) and NOC. NOC is doing a homework to start trade of lubricants, bitumen and grease, said Agrawal, adding that NOC will place an order for these products once it clears the existing dues of IOC which is worth Rs 1.6 billion.