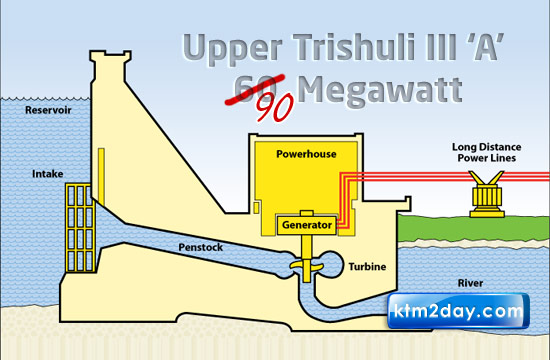 The Ministry of Energy (MoE) has decided to increase the capacity of the under-construction Upper Trishuli IIIA Hydropower Project to 90MW from the existing 60MW.

However, the ministry has not held enough discussions with stakeholders, including the project-owner Nepal Electricity Authority (NEA), on the matter. An NEA director expressed ignorance about the development.

The Energy Ministry has asked the Ministry of Finance for additional resources for the capacity upgradation of the project.

Construction of the project began six months ago with a loan assistance from China’s Exim Bank. A Chinese contractor, China Gezhouba Group Co Ltd, is undertaking the project work.

Finance Ministry Joint Secretary Lal Shankar Ghimire confirmed that his ministry received an Energy Ministry letter three days ago. The letter has sought an approval of the upgradation proposal and allocation of additional resources, said Ghimire. “We will forward the letter to the department concerned on Monday,” said Ghimire.

The move, however, has drawn criticism from opposition party leaders as well as Energy Ministry officials.

Nepali Congress leader and former Finance Minister Ram Sharan Mahat termed the move ‘illegal and abuse of authority’. “If the Finance Ministry approves the proposal, it will be one of the biggest scandals in the Nepali history,” he said.

The project was conceived during Mahat’s tenure as finance minister. According him, the existing contract model (engineering, procurement and construction) with the Chinese contractor does not allow making any changes to the project.

A senior Energy Ministry official termed the move ‘illegal and useless’. “Even if the capacity is increased, the additional energy will be available only during wet season which is worthless,” said the official. “By the time the project starts generating electricity, we will already have an additional 500MW generated from other projects. And, this makes the additional energy, that too only in rainy season, useless.”

The project is expected to be completed by May 1, 2014. The official also claimed that the ministry was forced to take the decision due to pressure from politicians and bureaucrats as per the demand of the Chinese contractor.

Another official at the Energy Ministry said as the capacity upgradation requires an additional Rs 3 billion (existing estimated cost is Rs 10 billion), it is against the Public Procurement Act.

The Clause 55 of the Public Procurement Act 2007 states, “Provided that where a procurement contract has been concluded to procure a public construction work following the invitation of national level bidding and the price of any construction materials is increased or decreased unexpectedly by more than ten percent of the previous price, price shall be adjusted as prescribed by deducting ten percent in the amount so increased or decreased.”

The official said, “As the cost cannot be adjusted more than 10 percent as per the Act, increasing the cost by Rs 3 billion will be illegal.”

However, the Act does not specifically speak about the increment in cost in case of capacity enhancement. Yagya Prashad Gautam, Secretary at the Public Procurement Monitoring Office, said as the law speaks nothing about such a situation, nothing can be said about the Energy ministry’s move. “Nothing can be said until the original pact between NEA and the Chinese contractor is checked,” he said.

Energy Secretary Hari Ram Koirala, however, said the matter was still under discussion and they have sought just Rs 40 million from the government.

The foundation stone of Upper Trishuli III ‘A’ was laid in November, 2011. On February 25, 2011, the Cabinet approved a Chinese Exim Bank loan worth Rs 7.08 billion for its construction. The interest rate on the loan has been maintained at 1.75 percent and repayment period is 20 years.

The power generated by the project will be supplied to a substation in Matatirtha, Kathmandu, through a 220-KV 46-KK transmission line.