Number of domestic air travellers up 15.04% 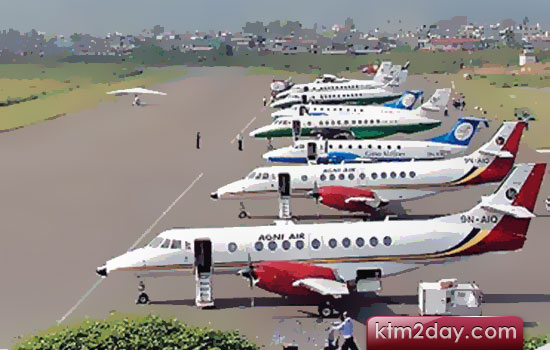 Domestic airlines have recoreded a growth of 15.04 percent in passengers number in the first quarter of 2012 as against the same period last year.

Eleven airlines companies (fixed wings and rotor wings) flew a total of 396,086 passengers in the first three months of 2012, an increase of 51,793 compared to the same period last year, according to the Tribhuvan International Airport (TIA).

Airliners attributed the growth of air travellers to rising disposable income among middle-class Nepalis and regular strikes in the different parts of the country during the period.

TIA statistics show aircraft movements dropped by 4.48 percent during the January-March period 2012 as against the same period last year. The Nepali sky witnessed 16,852 flights movement in the first quarter, which suggests there were around 188 aircraft landings and departures on an avergare at the TIA each day.

The first quarter of 2012 has been good for three airlines companies—Buddha Air, Yeti Airlines and Agni Air—in terms of passengers occupancy.

Buddha Air recorded a strongest growth in passenger movement, carrying 205,743 passengers in the first quarter of 2012, up 40.39 percent compared to the same period last year. The airlines fleet expansion drive has allowed it to consolidate its market share in domestic aviation. Buddha’s nearest competitor Yeti Airlines saw its passenger movement grow by 4.28 percent. The airline flew 112,009 passengers in the first quarter, while Agni Air recorded a growth of 7.76 percent to stand third in passenger movement. However, Yeti Airlines subsidiary Tara Air returned a poor result in the first quarter, suffering a drop of 18.76 percent for the period compared to the same period last year. The carrier mostly operates short-haul flights, including those to the remote sector.

Tara Air’s officials blamed bad weather conditions as a major factor for the carrier’s negative growth rate. Large numbers of flights had to be cancelled during the January end and the first week of February this year due to adverse weather conditions.

According to Guna Airlines, the carrier’s compulsion to suspend its flight since March had affected its growth momentum. “We have resumed our operation from June 11,” said Prajwol Thapa, marketing manager of Guna Airlines. “Delay in delivery of aircraft spare parts for maintenance had forced us to suspend flights in March.”

The period between January and February is normally considered an off-season for the domestic airlines and aviation market analysts termed the passenger growth during this time a significant one. Purna Chudal, chief of the domestic airport division at TIA, said three factors—regular strikes in Tarai, special fares offers by airlines and rising disposable income of middle class Nepalis—were the reason that led to the surge in air travellers.

“Nowadays, people are more concerned about time and safety. And air travel has become more affordabl, leading to the boom in domestic aviation market,” Chudal said.

Airliners said passenger movement in domestic aviation generally increases in the second half of the year. The August-November period is the prime business season for the domestic carriers with the occurrence of the Dashain and Tihar festivals and the tourist season. Airlines operators are hopeful that more busy seasons are ahead of them. Although, Nepali aviation market has not witnessed new players since a long time, the existing companies are continually expanding their fleets.