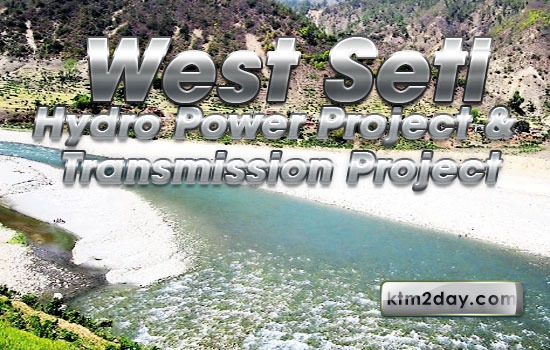 Six months after signing an initial agreement, the Investment Board (IB) and CWE Investments, a subsidiary of China Three Gorges Corporation (CTGC), on Monday signed a revised memorandum of understanding (MoU) for the development of the 750-MW West Seti Hydro Power Project and the Transmission Project.

With the signing of an agreement, decks have been cleared for the development of the $2 billion (Rs 180 billion) projects. The Cabinet meeting on Monday endorsed the MoU, according to PMO sources.

The agreement follows discussions held in Beijing in the second week of August between top government officials and the CTGC, where the Chinese company agreed to revise the MoU signed on February 29.

The agreement has ensured 10 percent equity to the local population in the Far West, allocation of 150 MW of electricity from the project to the region and multipurpose benefits from the project to the maximum extent economically possible. Both the parties—the IB and the CWE—also agreed to synchronize the completion of the transmission line project with the completion of the West Seti hydro power plant.

IB CEO Radhesh Pant said the agreement was signed in line with the suggestions put forth by the Natural Resources and Means Committee (NRMC) of the dissolved parliament on the initial MoU between the Energy Ministry and the then China Three Gorges International (now CWE Investment Company).

“This MoU signing has put transparency and national interest on the top,” said Pant.

The NRMC had in March suggested making the project a multipurpose one by giving 10 percent stake to the people of the Far West and extracting maximum benefits for the country.

Both the parties have jointly agreed to update the work plan and put into place contracting terms which will help avoid cost overruns and ensure timely completion of the project. The project is expected to be completed by 2020.

According to the IB, the CWE has offered to provide help to secure financial closure on the transmission line project. Similarly, the IB will assist the Chinese company in the implementation of the project, which includes government approval, provision of all available past studies for the project, land acquisition, resettlement and environmental impact assessments.

The agreement has also explored new possibilities of developing an industrial hub in the Far West with technical and financial assistance from CWE’s holding company, China Three Gorges Corporation (CTGC). The project will supply 150 MW of electricity to this industrial hub.

“CTGC will either develop the hub on its own or as a joint venture with the Nepali private sector, be it financially or technically,” Pant said. An IB source said that a technical team from the CWE will arrive in Nepal to begin further technical study.

The much-talked-about hydro project had been given a second lease of life when the government and the Chinese company signed an MoU on February 29. The project was earlier stalled for 17 long years as its licence holder, the West Seti Hydropower Company Limited failed to garner financial resources for its construction.