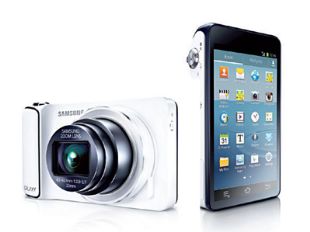 NEW DELHI: Samsung’s new Galaxy Camera is a testament to innovation: proof that the successful Galaxy series & not-sosuccessful cameras can be merged to create something both unique & useful. It’s hard to say whether it is more a Camera or a ‘Galaxy’ — both compete for space and yet complement each other so beautifully. On one hand, it’s a quad-core, connected Android device with a large, highres screen. But it’s also a decent camera with manual exposure controls, built in pop-up flash, various built in filters/picture modes plus a huge 21x optical zoom.

You’ll be surprised at what it can do. You can get any Android app, watch movies, surf the web, listen to music, instantly share photos, edit photos/videos on the device, upload to anywhere you like and even make a call (though only VoIP calls using Skype etc). Since it has GPS, you can use it as a navigation device (Google Navigation is free) or use the hotspot feature to share a 3G connection. New uses will be discovered as you start using it.

It’s not perfect for sure. Battery life could be better and the boxy design and large size is not to everyone’s tastes. As a first attempt though, it’s amazing. This is the camera for someone who wants the last word in a coverged device.

Not only do you get a good quality camera with massive optical zoom, but you also get a premium Android tablet with a beautiful screen, superlative performance and seamless connectivity. There’s nothing else quite like it.

The only thing is, this is still a compact camera and the image quality is comparable to compact cameras that are priced half as much. So if you are after the best image quality and nothing else, you’re better off with cameras like Canon’s PowerShot S110 or Sony’s RX100 (both of which cost roughly the same as the Galaxy Camera).