Salman to open restaurants and hospitals 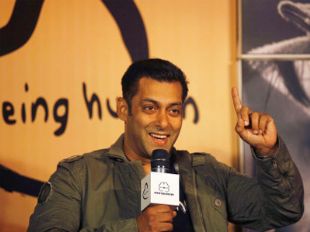 MUMBAI: Joining the bandwagon of actors into the business of food joint chains, actor Salman Khan is planning to open restaurants and hospitals and insists it is not for business but for a noble cause.

“We will start restaurants in metros first…We will open first in Mumbai and Pune and so on. The profits earned from them will go to the needy people living in metros. We will tie-up with someone who has the same kind of ideology… we are doing all this for a noble cause,” Salman told PTI.

Salman runs a charitable organisation ‘Being Human’, with an aim to help the needy people in areas of education, healthcare and others. Now, he is planning to venture in new areas of business under the same name.

“We want people to come eat, drink and that is how they will in a way do charity. So when you are wearing something, eating or drinking something you are doing your bit of charity, it is all going to help people towards education and healthcare,” the actor said, adding that he also intends to enter into healthcare segment by opening hospitals.

“We have plans of opening hospitals. We would be doing that…after restaurants are out. We need to earn money to put in a hospital, we need some time,” Salman said.

The actor yesterday opened the first ‘Being Human’ flagship store that has a clothing line and accessories.

“I think this is the worst ever business proposition that anyone can be in. I am happy that I have found like-minded people who are interested in not earning the profit but to be associated with the brand and keep little for themselves and do more charity. So this is all about ‘Being Human’,” he said.

One of the reigning stars of Bollywood, Salman is aware that it his name that is going to help in garnering attention and pushing the ‘Being Human’ brand.

“There are perks attached to it (to my name) that I can use my name and raise money, but I think ‘Being Human’ will be a lot bigger than Salman,” he said.

At the opening of the store, Salman’s entire family came to lend him the support. His mother Salma Khan, step-mother Helen, brothers Sohail and Arbaaz, sisters-in-law Seema Khan and Malaika Arora Khan, sister Alvira and brother-in-law Atul Agnihotri were in attendance at the launch.

The family appreciated Salman’s efforts. “We are happy that the store has opened. We all are very excited. There is a noble cause attached with the opening of store. Salman is doing all this for society,” Sohail said.

Maliaka Arora Khan felt the clothing line was stylish both for men and women. “I love wearing ‘Being Human’ t-shirts. They are stylish, trendy and affordable,” she said.

On the movies front, Salman’s kitty is full with projects like – two films of brother Sohail — ‘Sher Khan’ and other reportedly titled ‘Radhe’, Boney Kapoor’s ‘No Entry Mein Entry’, an action film with Prabhu Deva and a movie with Sooraj Barjatya.