World Wide Web Turns 25, Its Creator Talks About Its Future 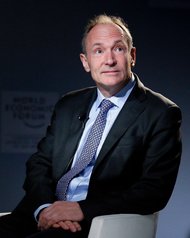 In 1989, Tim Berners-Lee, a software engineer, sat in his small office at CERN, the European Organization for Nuclear Research near Geneva and started work on a new system called the World Wide Web.

On Wednesday, that project, now simply called the web, will celebrate its 25th anniversary, and Mr. Berners-Lee is looking ahead at the next 25.

But this moment comes with a cloud. The creators of the web, including Mr. Berners-Lee, worry that companies and telecommunications outlets could destroy the open nature that made it flourish in their quest to make more money.

Today, more than two people in five are connected to the web. Every minute, billions of connected people send each other hundreds of millions of messages, share 20 million photos and exchange at least $15 million in goods and services, according to the World Wide Web Foundation.

Of course, Mr. Berners-Lee had no idea that what he was building would have such an effect on society or grow so large.

“I spent a lot of time trying to make sure people could put anything on the web, that it was universal,” he said in an interview. “Obviously, I had no idea that people would put literally everything on it.”

Since then, “everything” has included the GIF, (pronounced “jif,” like the brand of peanut butter, rather than with a hard G sound), memes, Google, Facebook, Twitter, news sites, Pets.com, YouTube and billions of web pages, by some estimates.

One of the most important aspects of the growth of the web came in April 1993, when the technology was made available for anyone to use, royalty-free.

While Mr. Berners-Lee said he was incredibly grateful for what the web has done since those early days, he warned that people need to realize that a current battle around so-called network neutrality could permanently harm the future of the web.

The idea behind net neutrality is simple: The web material we see on our laptops and smartphones, whether from Google or a nondescript blog, should flow freely through the Internet, regardless of its origin or creator. No one gets special treatment. But companies like Verizon hope some people will pay more to get preferential treatment and reach customers quicker.

“The web should be a neutral medium. The openness of the web is really, really important,” Mr. Berners-Lee said. “It’s important for the open markets, for the economy and for democracy.”

He worries that people online have no idea what could be at stake if large telecommunications companies took control of the web and the type of material we now have access to without any blockades or speed barriers.

Mr. Berners-Lee said he planned to spend the next year working with web consortiums to spread awareness of these issues. “It’s possible that people end up taking the web for granted and having it pulled out from underneath them,” he said.

In addition to helping further net neutrality, the World Wide Web Consortium, the leading web standards organization, hopes to help get the billions of people who are not on the web connected to it.
In a news release, the consortium said the goal was to bring those people to the web via mobile phones, which cost lest than traditional laptops and Internet connections.