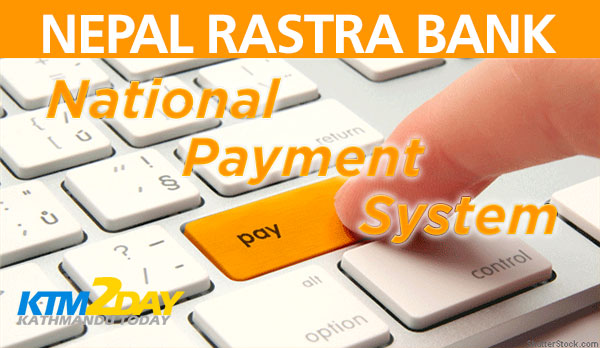 The interoperability between bank accounts might become a reality in the near future as the central bank is mulling a strategy to launch National Payment System (NPS).

The system will initiate and direct the transfer of funds between the accounts of payers and payees at financial institutions.

Nepal Rastra Bank (NRB) has decided to introduce NPS that will provide effective mechanisms for the exchange of money between the transacting parties.

“NRB is adopting a strategic approach to reform the payments system in Nepal, with the objective of achieving a safe and efficient national payments system,” says the document released by the central bank as an overview of the proposed NPS.

NRB will take the front seat to reform the overall payment infrastructures for transacting and clearing payment instruments, starting from legal framework.

The primary goal of the NPS in Nepal, as in all countries, is to enable the circulation of money by providing circuits for effecting payments, domestically and internationally, according to the document.

Despite the existence of interbank card-based switching and clearing services being provided by several organisations, the interoperability between different financial institutions is limited at present.

The lack of interoperability — that allows an account holder of one bank to make payments to another — between financial institutions has posed a difficulty in making mobile banking more adaptable by the larger mass.

The document has recognised SmartChoice Technologies (SCT), which has 84 members and currently operates around 1,500 ATMs and 2,500 POS terminals, with some 1.7 million cards issued, as the largest of such payment service providers.

However, it has called attention to the significant settlement risk involved as SCT’s fund settlement is undertaken at a commercial bank, which might have difficulty in meeting all the obligations stemming from all debit card transactions.

Moreover, once the NPS comes into operation, it aims at making government collection and disbursements fully integrated with the system. The system will also cover welfare payments being made by the government such as social security allowance. Such allowances that cover about one million citizens are mostly distributed in cash.

However, the Ministry of Federal Affairs and Local Government has launched a pilot project to make payments via electronic transfers using the networks of commercial banks.

The proposed document also aims at using the payments system to transfer and collect government revenue. The system is also looking at making international remittances being sent to Nepal cost efficient.

Most importantly, NPS will provide a platform to integrate interbank lending and short-term securities market.

In the medium term, NRB will seek to establish a modern interbank money market in Nepal, which will serve as an important element for liquidity management, to facilitate the timely settlement of transactions and support NRB monetary policy operations, as a part of NPS.