Home » NEWS » Nepal warns against use of choppers in mountains

Nepal warns against use of choppers in mountains 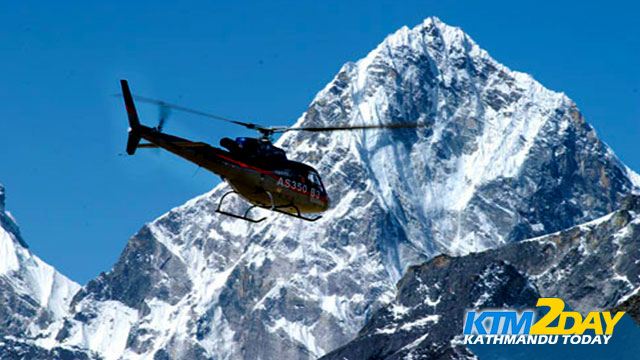 KATHMANDU: Nepal’s Tourism and Civil Aviation Ministry has restricted the flying and takeoff of choppers above the base camp areas of all mountains in the Himalayan country, officials said on Sunday.
In a circular to all concerned agencies and stakeholders over the weekend, the ministry said that helicopters above the base camps can be taken only for rescue efforts only after approval from the aviation regulatory body. The ministry has asked the country’s civil aviation regulatory body to put a close eye on the unauthorized use of choppers in the mountainous zone, stating that it was a threat to safety.
“Due to the security risk and growing misuse of choppers above the base camp area, the ministry is forced to come up with this stern restriction,” Madhusudan Burlakoti, spokesperson of the ministry, told Xinhua on Sunday.
He said that the ministry has given special instruction to the Civil Aviation Authority of Nepal (CAAN), the country’s aviation regulating body, to look into the matter and penalize those who are found to be defying the rules.
Using a helicopter constitutes a serious moral and legal violation of tradition in mountaineering as well as aviation activities in Nepal.
Nepal normally allows helicopters above Mount Qomolangma (also known as Everest) base camp located at about 5,400 meters (17,716 feet) to rescue climbers in distress or to drop climbing equipment and supplies, according to Nepal’s Mountaineering Expedition Regulation.

CAAN officials said that they are committed to not allowing the use of choppers above the base camp area for other purposes. “We have not approved the use of choppers above the base camps of all mountains that are used for expedition and we are committed the same in the future as well,” CAAN head Ratish Chandra Lal Suman said, adding that his office will penalize those who are found of violating the norms.
According to the CAAN, it will closely watch the growing use of choppers in the mountainous region of Nepal where a number of well- off tourists have been suspected of flying choppers to grasp the aerial view of mountainous beauty.
Meanwhile, the arrival of tourists from China to Nepal has nearly doubled in the last three years, a government report reveals on Sunday. The report released by the Tourism Ministry said the number of Chinese tourists went up to 89,509 in 2013, up from 46,360 in 2011. In the year 2012, 71,861 Chinese visitors visited the Himalayan country. The report attributed enhanced air connectivity between the two countries for the overwhelming increase of Chinese tourists to Nepal.
It also estimates that due to the geographic closeness, the growth in the flow of Chinese tourists will continue. The spending by Chinese tourists also increased to an average of 100 U.S. dollars a day in 2013 from 50-60 dollars a day in 2011. “China’s placing Nepal in the list of new leisure destinations and its proximity and Nepal’s low-budget tourism have lured Chinese tourists,” said the report. Officials at Nepal’s Tourism Ministry said the increase in the arrival of Chinese tourists began with the government efforts to attract visitors to Nepal from the northern and southern neighboring counties since the Europeans and Americans were plagued by the latest wave of financial crisis. In the past, Nepal used to depend on European markets. However, the trend has changed with the world now seeking Chinese travelers.
“Chinese visitors have been by far the fastest growing segment over the last three years. The overall tourist growth is satisfactory despite the protracted political transition,” Surendra Bir Malakar, former president of the Nepal Chambers of Commerce told Xinhua by phone. Local tourism entrepreneurs said there is a lot Nepal can do to attract more Chinese tourists.