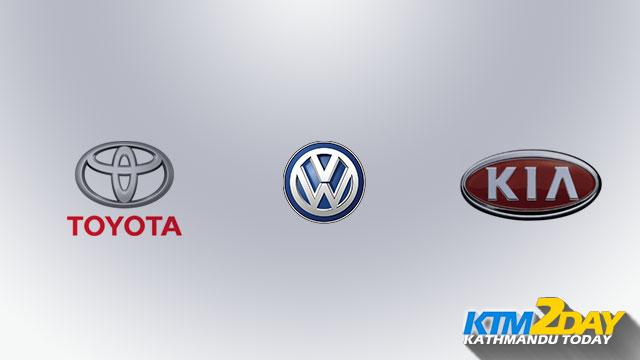 Three new four-wheelers are slated to hit Nepali roads next month. These hatchbacks, sedans and sports utility vehicles (SUV) from Toyota, Volkswagen and Kia will be arriving in the market within the first week of August, said traders.

United Traders Syndicate, the authorized distributor of Toyota Motors in Nepal, is all set to launch its new model Toyota Etios Liva premium hatchback in the domestic market by the first week of August.

The vehicle is the flagship hatchback of Etios. The Liva will be the second small car from Toyota in Nepal after the Yaris which was launched four years ago. The automobile is equipped with a 1,197 cc, 78.9 bhp, 16 valve petrol engine which produces power of 78.9 bhp at 5,600 rpm and a maximum torque of 104 nm at 3,100 rpm. It comes with a 5-speed manual gearbox.

The company said that the Liva would be the perfect family car as it has great cabin space which can comfortably accommodate five individuals. The hatchback has a 45-litre fuel tank and a 251-litre trunk.

Mahendra Shrestha, sales executive of the company, said that the Liva would cost around Rs 3.3 million in the domestic market.

Meanwhile, Pooja Internatio-nal, the authorized distributor of Volkswagen vehicles in Nepal, is planning to launch the Volkswagen Jetta luxury sedan this week. The vehicle is powered by a four-cylinder, turbo charged 1,968 cc diesel engine.

In terms of the interior, the new Jetta offers a small leather package in the steering wheel, gear shift knob and handbrake grip. The company claims the car has a top speed of 210 kmph.

Bibek Bijukchhe, chief executive officer of the company, said that the vehicle would be priced at around Rs 6.4 million and would be competing with the Toyota Corolla and Mazda Six in the domestic market.

Similarly, Continental Associates, the authorized distributor of Kia Motors in Nepal, will be launching an upgraded version of the Kia Sportage 2014 SUV by mid- August. The vehicle comes with added features like 17-inch alloy wheel, Bluetooth connectivity, dual air bags and electric and heated outside rear-view mirror. It also comes with a 4.2-inch colour TFT LCD with rear-view camera, daytime running light, tilt and telescopic steering.

Ugendra Shrestha, assistant general manager of Continental, said that the Sportage would have a price tag of Rs 7.25 million in the domestic market. “Its previous version was a good success in Nepal, and this upgraded version will get an even better response from customers as it will come with unique looks and have many added features,” he said.