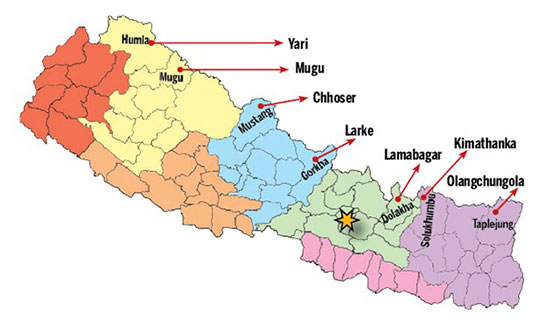 For this, a joint team of Nepal and China would conduct a study on the effectiveness of the existing infrastructure, the Department of Customs said in a statement. During the 28th Nepal China Boarder Customs Meeting, the two sides agreed to operate more customs offices across the border.

Nepal has set up customs offices at Chhoser village in Mustang district, Larke in Gorkha, Kimathanka in Sankhuwasabha, Lamabagar in Dolakha, Yari in Humla, Mugu village in Mugu district and Olangchungola in Taplejung but they are used mostly for cross-border trade by the local residents.

Rasuwa and Tatopani customs points were affected by the April 25 earthquake. Rasuwa Customs has already come into operation. Nepal has been bringing fuel gifted by the Chinese government through this route for the past few days. According to the statement, China has given high priority to operating the Khasa-Tatopani route as per Nepal’s request. The Customs Department stated that China has agreed to ask its immigration department to make arrangements for allowing Nepali traders, trucks and drivers in Kerung, the bordering Chinese market that connects with Rasuwa district.

In the bilateral meeting of the customs officials that concluded on Thursday, China agreed to make such arrangement, the government stated.

Deputy DG Regmi said that the Chinese side accepted Nepal’s request to allow Nepali traders, drivers and trucks to enter into the Chinese territory. Rasuwagadhi is the only border point currently in operation for inland bilateral trade as the main Khasa-Tatopani route has been shut for six months.

Although Nepal has set up its customs and other infrastructure in the original place, the Chinese side is yet to reestablish its damaged facilities. China was forced to relocate its offices from Khasa to Kuti, another nearby Tibetan town. Regmi said the Chinese side agreed to establish its customs office either in Khasa or another nearby point, wherever feasible, to resume the route. The two sides agreed to reopen the damaged offices at the earliest.

According to the Nepali team, the Chinese side also agreed to complete the construction of the dry port at Larcha in Sindhupalchok and start work for another dry port at Timure in Rasuwa.

The visiting team also agreed to request Chinese manufacturers and traders who export goods to Nepal to label manufacture and expiry dates in English and Nepali languages. After Nepal requested for necessary measures that help it utilise duty-free access to the Chinese market, the two sides agreed to assign a joint technical team to conduct a study on the matter. China has provided duty-free access for more than 8,000 Nepali goods.