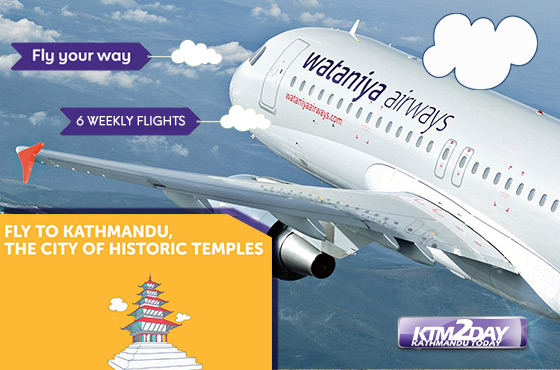 Wataniya Airways of Kuwait has decided to operate direct flights to Nepal as it moves to cater to growing travel demand with Nepali migrant workers rushing to the oil-rich country in larger numbers.

The carrier will be operating a daily service starting November 29. It received operating authorisation from the Civil Aviation Ministry on October 30.

Subash Jha, deputy director of the Air Transport Division of the Civil Aviation Authority of Nepal (Caan), said that Caan approved the carrier’s airport slot, or landing rights, on Monday at the recommendation of the Tribhuvan International Airport (TIA) slot management committee.

Wataniya flights will arrive at TIA at 11 pm and depart at 12 midnight. “The direct service is expected to benefit Nepali migrant workers in Kuwait,” he said.

Kuwait-bound Nepali travellers currently have to go via Saudi Arabia as there is no direct air connection. Ministry officials said that the direct flight is expected to make travelling cheaper. The service is likely to increase tourist movement from Kuwait to Nepal too.

Last Tuesday, Wataniya announced a $2.68 billion deal with Airbus to purchase 25 A320neo aircraft as the carrier plans to expand its network around the world, having restarted its operations in July 2017, according to media reports.

Wataniya resumed services in July after ceasing operations in 2011, according to Reuters. The carrier closed after three years in the business due to its financial situation and political instability in the Middle East.

Kuwait is the fifth biggest employer of Nepali workers, according to the Department of Foreign Employment.

Nepal and Kuwait signed an air service agreement (ASA) in January 2006. Since 1963, Nepal has signed bilateral ASAs with 38 countries, New Zealand and Vietnam being the latest countries. This provides 6 million seats per annum to and from Nepal. However, less than 40 percent of this capacity is being utilised.

Currently, 28 international airlines are operating flights from Kathmandu to 22 cities in Asia and Europe. International passenger traffic in Nepal swelled 9.12 percent to 3.51 million in 2016, according to TIA.

International air passenger traffic through TIA plunged 8.37 percent to a 13-year low of 3.21 million in 2015 after the April earthquake scared away tourists. Airport officials expect 2017 to be another big growth year as several airlines have increased their frequency and launched new services, signaling a dramatic growth in tourist arrivals.