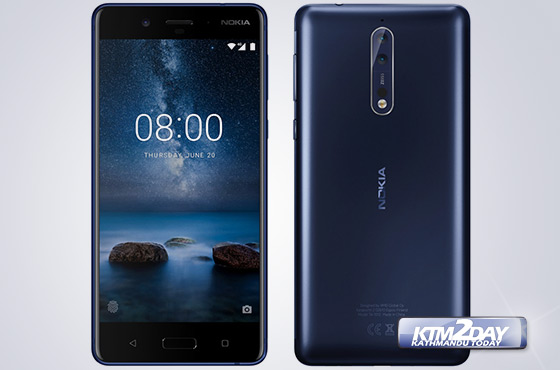 Paramount Electronics, authorised distributor of Nokia phones in Nepal will be launching the Nokia 8 in the first week of December. The smartphone will be priced at Rs62,999.

Pre-orders for the Nokia 8 has already opened.

The phone sports Corning Gorilla Glass 5 on the front for improved scratch and impact resistance.

Like other smartphones in Nokia’s lineup, the flagship Nokia 8 runs a near-stock version of Android.

Powering the Nokia 8 is the Qualcomm Snapdragon 835, backed by 4 GB of RAM and 64 GB of internal storage. Users can expand the storage using a microSD card, up to 256GB. The device supports fast charging via the USB-C port.

Nokia 8 is the first smartphone from Nokia to feature a dual-lens camera system. The rear camera setup includes a set of two 13MP sensors which is equipped with optical image stabilisation, f2.0 aperture and a dual-LED flash. It has a 13 MP, f2.0 front camera. The phone has a 3090mAh battery.

The phone will be available in Glossy Blue colour. Customers will get one year warranty from the company. “Nokia 8 is for customers who want a high-end Nokia phone,” said Raj Sharma, national sales manager of Paramount Electronics.

Nokia Corporation, stylised as NOKIA, is a Finnish multinational communications, information technology and consumer electronics company, founded in 1865. Nokia is also a major contributor to the mobile telephony industry, having assisted in the development of the GSM, 3G and LTE standards, and was, for a period, the largest vendor of mobile phones in the world, its dominance also extending into the smartphone industry.

Nokia reentered Nepali market earlier this year after a gap of several years. It has already launched a number of phones in Nepal which include Nokia 3, Nokia 5, Nokia 2 and Nokia 6.