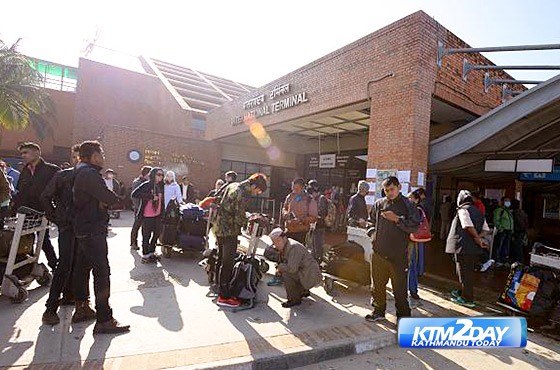 Tribhuvan International Airport (TIA) witnessed robust passenger and aircraft traffic growth in the first nine months of 2017 despite infrastructure bottlenecks.According to TIA data, 2.74 million travellers passed through the country’s only international airport as of the third quarter of 2017, up 9.59 percent year-on-year.

A breakdown by airlines shows that India’s Jet Airways topped the list of carriers with the highest number of passengers. Jet, which operates three flights to Delhi and two flights to Mumbai daily, flew 347,042 passengers in the first nine months of this year, recording a 48.46 percent jump.

Nepal Airlines came second with a passenger carriage growth of 2.23 percent. It flew 281857 passengers during the review period. The growth rate of Nepal Airlines dropped after it sold one of its two ageing Boeing 757s, bringing down its international fleet to three aircraft.

Doha-based Qatar Airways, that had been the top passenger carrier in Nepal for many years, slipped to the fifth spot with a sharp 16.62 percent drop in passenger carriage. It flew 215,842 passengers in the first nine months of 2017.

Nepali carrier Himalaya Airlines, which launched direct flights to Doha, Qatar in May last year, carried 88,783 passengers in the first nine months of this year.

Despite infrastructure bottlenecks at the country’s sole international airport, it saw aircraft movement jump 27.54 percent. The Nepali skies recorded 90 international flight movements daily on average.
According to the Civil Aviation Authority of Nepal, it has initiated the process of developing new parking bays and expanding the international terminal building to enhance facilities and safety standards at TIA.