Vivo has launched its latest offering the Vivo V9 in the Nepali market .The smartphone comes with notched display and 4GB RAM.

The Vivo V9 is a flagship offering from the Chinese smartphone vendor. The smartphone features a notch at the front and looks similar to the iPhone X. The device sports an almost bezel-less display and is equipped with a rear-mounted fingerprint sensor.

Flaunting a metal unibody design, the Vivo V9 ships with an internal storage space of 64GB which can be expanded further using a microSD card up to 256GB so that you have enough space to store all that you want.

The Vivo V9 flaunts a 15.51cm Full HD+ LCD display which is vibrant and reproduces vivid colours. The device delivers a unique visual experience to its users. 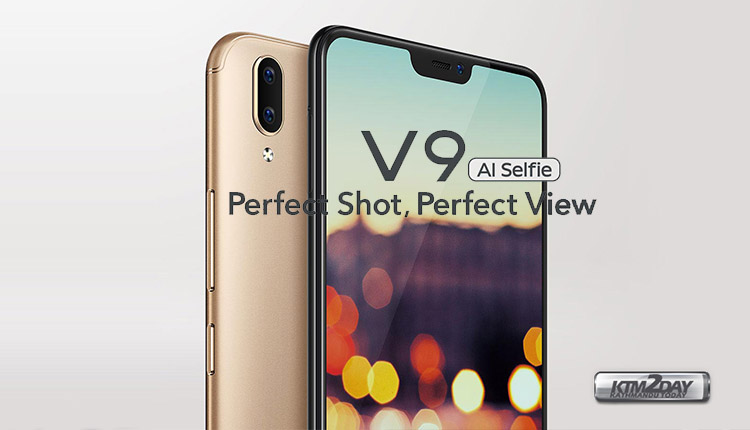 On the software front, the Vivo V9 runs Android 8.1 Oreo out of the box and comes with dual 16+5-megapixel rear shooters which can capture detailed and quality images and videos. Also, there is an LED flash that helps you shoot in the dark. On the front, to assist selfies and video calling, the smartphone is bundled with a 24-megapixel front-facing sensor which is also paired with a soft light flash.

t its heart, the Vivo V9 is armed with a 2.2GHz octa-core Snapdragon 626 SoC and 4GB of RAM that ensures smooth sailing even while you are working on multiple apps at the same time or playing graphics-intensive games like Asphalt 8 or Modern Combat.

The handset is fuelled by a non-removable Li-Ion 3,260mAh battery which is good enough to last throughout the day. If that does not suit your requirements, there is support for fast charging too.