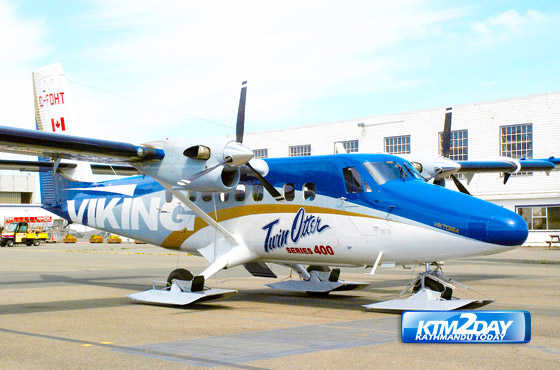 The board of directors of Nepal Airlines Corporation (NAC) has begun discussions on its plan to buy six new Viking Air DHC6-400 Twin Otter aircraft to expand its remote area services.

The national flag carrier is also in talks with the manufacturer on a buyback deal under which it can trade in its three vintage Twin Otters.

“The board is expected to finalize the discussions and approve the project soon,” said NAC Managing Director Sugat Ratna Kansakar. “After that, the decision needs to be approved by the Tourism Ministry,” he said.

Newly appointed Tourism Minister Rabindra Adhikari has issued a 100-day action plan, and one of the items on his agenda is buying six new Twin Otters. Kansakar said that if the government approves the project, the manufacturer would deliver the aircraft within seven months.

“The Employees Provident Fund has pledged to finance the purchase. The deal is expected to cost Rs4 billion,” he said. “We can also get some money if the aircraft manufacturer will buy back our three Twin Otters.” Kansakar said that the board would decide the purchase modality: full purchase or lease purchase.

The Twin Otter made its first appearance in Nepal in 1971 as a replacement for the DC-3 Dakota, the workhorse of the then Royal Nepal Airlines Corporation.

In 2005, Viking purchased the Type Certificates for all of the out-of-production de Havilland aircraft, including the Twin Otter. After an extensive market analysis was conducted, it was determined that an overwhelming demand existed to bring the Twin Otter back into production, thus the Viking Series 400 Twin Otter Production Programme was announced in 2007. The first production aircraft was delivered in 2010. In Nepal, private carrier Tara Air is the first customer of the Viking plane.

NAC has said that it has enough manpower, like engineers and pilots, to fly the DHC-6 Twin Otter. The carrier’s move comes at a time when demand for air transport service has gone up sharply in remote areas. Kansakar said it was a social obligation for the state-owned enterprise to fly to remote areas, although the potential of service expansion to far-flung destinations is yet to be fully tapped by private airlines.

It has not been able to use the Y12e aircraft in remote airfields due to regulatory limits. As per the Chinese aircraft’s specifications, it can fly to airports with a maximum grade of up to 2 percent or about 1.2 degrees of slope.