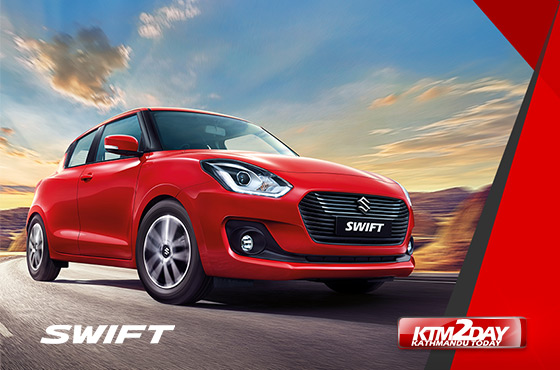 The third generation of the iconic Swift has been launched by CG Motocorp, authorised distributor of Suzuki four wheelers in Nepal. The all-new Swift comes with an exciting design, enhanced performance and advanced safety features.

The Swift is an iconic premium hatchback that promises to be peppier, roomier and cleaner with advanced safety features. Built on Suzuki’s innovative 5th generation HEARTECT platform, the all-new Swift has a superior power to weight ratio with improved acceleration performance, reads a press release. The car was launched jointly by Shakti Gauchan, a member of the national cricket team and Arun Chaudhary, chairman and managing director of CG Holdings.

According to the company, the new Swift has received a ‘contemporary global styling’ makeover. The car now sports a new single-aperture front grille complemented by a sculpted body with strong shoulders for a seamless flow. There is a wrap around windshield with unified DLO (day light opening) graphics that extends to the back door glass, giving the Swift a striking visual statement of the floating roof.

The all new Swift also gets sleek and expressive LED projector headlamps with a distinct design signature element on the LED DRLs and rear position lamp. It runs on precision cut two-tone alloy wheels. The interior of the Swift gets a coordinated colour theme accentuated by urban satin chrome finish, with sporty yet comfortable cabin space for passengers.

Suzuki has designed the all new Swift using the innovative 5th generation HEARTECT platform which allows the car to have improved strength and rigidity while improving the power to weight ratio. The Swift is powered by a petrol 1.2L VVT engine that is tuned for superior performance, coupled with highly balanced suspensions for better ride and comfort.

This results in better acceleration performance for a peppy and fun to drive experience and improved NVH performance.

The company claims a mileage of 22km per litre, nearly 7.8 percent more than the outgoing Swift. Advanced safety features are also found on the all new Swift, with dual airbags, ABS with EBD and ISOFIX (child seat restraint system) offered as standard. The new Swift also embodies Suzuki’s ‘Total Effective Control Technology’ for occupant protection and complies with frontal offset and side impact regulations and meets advanced regulations for pedestrian safety, reads the press release.

The company has also packed an advanced music system with Bluetooth hands free system inside the Swift and also improved the A/C performance.

“The Swift brand is loved for its bold stance, strong shoulders and unmistakable road presence. With this latest evolution, these hallmark features have gone to the next level,” said Karan Chaudhary, executive director of CG Motocorp. “I am confident that with the all-new Swift, we will be successful in capturing the imagination of our customers and offer them a car which meets their demands.”