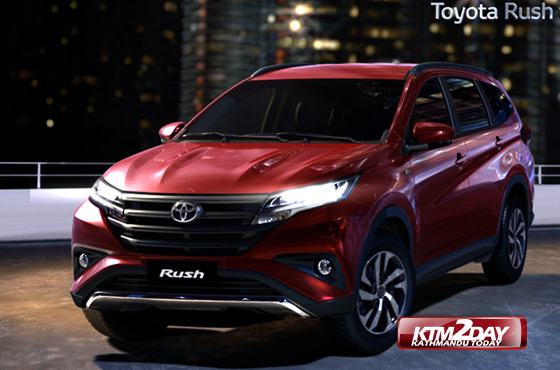 Toyota has launched their latest SUV named Rush, a five-seater compact SUV in Nepal. The Japanese carmarker is looking to dominate the local market and this latest SUV is well on its way to fulfilling that target with over 200 sold via pre-booking.

Demand for the all new Toyota Rush is high due to the Japanese carmaker’s history of producing extraordinary vehicles which continues to meet consumers’ need in Nepal. And with 50 years of selling Toyota vehicles in Nepal, the company has gained a spot as one of the top car brands, reads a press release.

UTS, the sole authorised distributor for Toyota in Nepal has been importing vehicles that suit the geographical structure and consumers’ requirements.

Top 5 Scooters that give Best Mileage –…

Toyota Rush—the company’s entry level SUV—is set to compete with other popular cars in Nepal such as the Hyundai Creta, Ford EcoSport and Renault Duster. To set itself apart from the compact SUV competition, the Toyota Rush is equipped with features such as Auto Light Control, anti lock breaking system, air bags, hill assist control, traction control, vehicle stability control and much more.

The Rush also gets chrome grills, aggressive air dam with dedicated slots for the fog lamps and a high ground clearance of 220mm. Hop inside the SUV and one will be greeted by the large 7-inch touchscreen infotainment system. The overall styling of the Rush makes it look like a baby Fortuner with its wide grille, flared wheel arches and massive 17 inch tires.

This is expected to position the Rush as the best in class SUV in Nepal, states the release.

Customers can visit the nearest showroom for more information and booking of the Toyota Rush.

The Toyota Rush is priced at Rs.61.90 Lakhs in the nepali market.