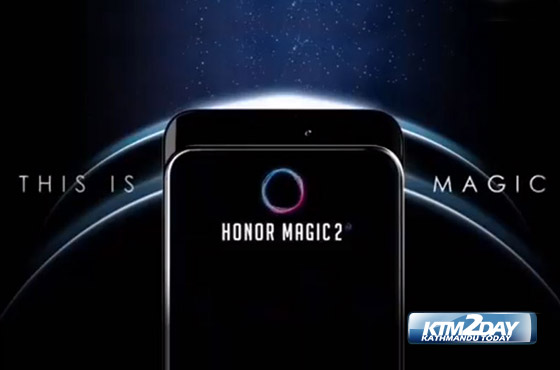 Ahead of IFA 2018, Huawei’s sub-brand Honor made unveiled the second-generation Honor Magic phone in Berlin. George Zhao, Honor president teased the Honor Magic 2 smartphone which will come with a full view display, without the notch. To offer an immersive full-screen experience, the Honor Magic 2 comes with a slide-out front camera module, and the implementation is similar to what we have already seen on the Oppo Find X.

However, Zhao did not share any specific timeframe as to when the smartphone will be launched. The Honor Magic 2 will be powered by 7nm Kirin 980 SoC with enhanced AI capabilities, and will come with Magic Charge feature that will support 40W charging speed. The company teased that it will come with 15-layer safety protection system. Honor says, the new charging system will charge 90 percent battery in flat 30 minutes.

The Honor Magic was launched in 2016 with a lot of AI tricks. In fact, it was the first AI smartphone from the company. Now, with the Magic 2, you can expect even more AI tricks among other enhancements.