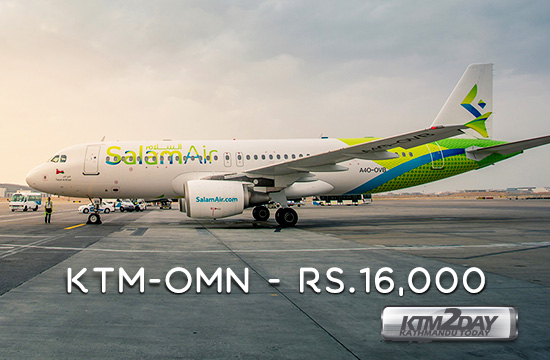 International airlines companies have been adding to the numbers of their flights to Nepal one after another after the government announced to celebrate the year 2020 as the Visit Nepal Year.

The latest airline to add to its flights is the Salam Air of Oman. The Thai Lion Air of Thailand had started its flights to Nepal less than two weeks back.

Presently 32 various airlines companies have been operating their flights to Kathmandu.

The Salam Air started its flights to Kathmandu in coordination of IME International Travels. This travels company is promoted by the business group IME.

Salam Air started its flight to Kathmandu with a 174-seater aircraft which landed at Tribhuvan International Airport this morning.

Chairperson of IME Group, Chandra Dhakal, said they have brought the ‘budget airlines’ with the objective of providing service at an affordable fare. The fare is Rs 16,000 to Oman. The arrival time is 8.00 am and the departure time is 8.40 am daily.

Speaking at a news conference organised at the airport, IME Group Chair Dhakal said arrangements have been made to travel to and from Oman at a modest price. He added that this would provide some relief to the Nepali migrant workers going on foreign employment to the Gulf countries.

Salam Air, the first budget airlines of Oman, started its flights since 2017. It has been operating flights to various 15 destinations using Airbus 320. Kathmandu has become the airlines 16th destination.