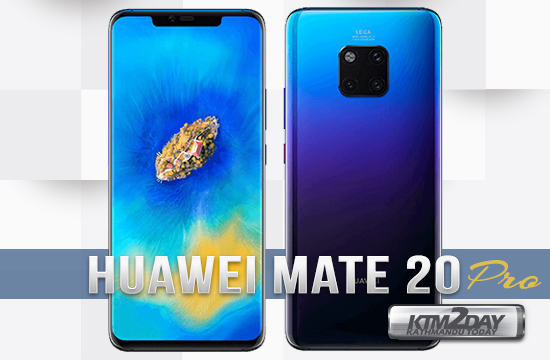 The Chinese manufacturer Huawei will present its two new flagship smartphones of the Mate 20 series in just over three weeks. We already have official pictures of the Huawei Mate 20 Pro and three of the planned color variants for Europe as well as some new details about the camera hardware.

The Huawei Mate 20 Pro will be part of a whole range of products that was already established with the Mate 20 Lite in the course of IFA . In addition to the Pro model, as usual, there will be a model without the suffix. The codenames of these devices are known to be “Hima” and “Laya”, with “Everest” also a third, to date not yet to be classified more accurate version, which is either an expensive “Porsche Design” model or even larger edition.

On the pictures available to us it can be clearly seen that Huawei now also places a notched design in the Mate series. The notched design will house the front camera and the ear piece ,In addition, other sensors, such as the face recognition and the notification LED.

The display size is currently not confirmed yet, with third-party sources hinting at 6.3 inches screen size. The resolution to be 3120 x 1440 pixels, a level previously unachieved by Huawei smartphones. It will be an OLED display under which a fingerprint reader is also installed in the lower area. 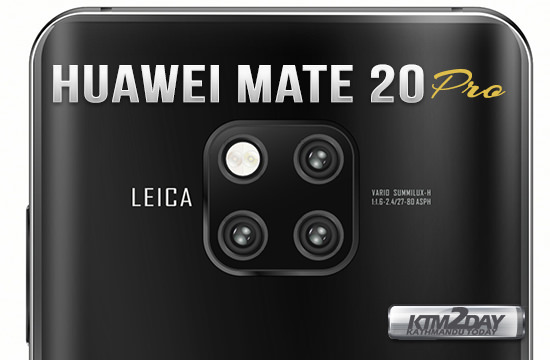 Huawei Mate 20 Pro will be armed with the latest Kirin 980 processor . The first 7 nanometer SoC in an Android-based smartphone was already announced at IFA 2018 and features eight ARM Cortex-A55 and Cortex-A76 cores working in three clusters. Two of the high-end cores achieve a maximum clock rate of 2.6 gigahertz, while the other two high-end cores work at 1.92 GHz and the economical A55 cores reach a maximum of 1.8 GHz.

Apart from these basic data, surprisingly little is known about the Mate 20 Pro. We can only rely on the pictures and some other sources. Particularly striking is of course the square arrangement of the three camera optics and the combined dual LED flash on the rear. The Leica logo is now emblazoned on it, so the German camera company is once again involved in the development.

The pictures reveal that the Mate 20 Pro cameras will probably be laced with aperture sizes of F/1.8 to F/2.4 and focal lengths of 16 to 80 millimeters . While the information on the aperture sizes may not be accurate, the information on the focal length equivalent suggests that Huawei has further developed the camera technology compared to the P20 Pro.

Thus, due to the specification of a focal length of 16 millimeters in one of the lenses indicates that it now seems an even more wide-angle optics installed, while the teleoptics with 80 millimeters focal length is also back on board. Whether or not the main sensor is equipped with its monstrous resolution of 40 megapixels with a 16mm optics, may be doubted, but this would ultimately lead to a very wide perspective, which could turn out to be rather unpractical in everyday life.

On the other hand, Huawei now has the option to realize a five-fold optical zoom, which, unlike the P20 Pro, actually offers a physically fivefold magnification. So far, they had used all sorts of software tricks to implement the five times “hybrid zoom”, in which the image information of all three camera sensors flowed in to achieve a realistic-looking five-fold enlarged image.

It is also conceivable that the monochrome sensor, which previously had the same focal length as the 40 megapixel main camera, is replaced by a color wide-angle sensor. On the other hand, this also results in the theory that Huawei now not only offers a 5x zoom, but also the option to switch to wide-angle if necessary.

According to our information, the Huawei Mate 20 Pro appears in the colors black, blue and twilight, whereby the last-named variant with its attractive color gradient is likely to cause a stir again. In addition, a dark green version will be released, although their availability in Europe is not yet confirmed – as well as the question of whether there will be more color variants, for example, using artificial leather.

The Huawei Mate 20 Pro will be officially launched on October 16, 2018 in London.