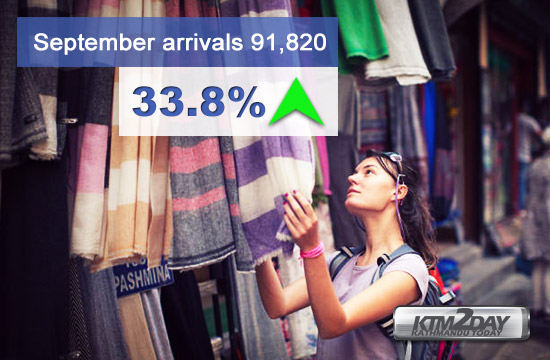 Nepal tourism started the peak autumn season with a flourish, recording a 33.8 percent jump in arrivals in September, thanks to strong growth from India and China. According to the Nepal Tourism Board (NTB), the country received 91,820 foreign visitors in September.

Nepal has four main seasons—spring, summer, autumn, and winter. Autumn (September to November) is the best season to visit Nepal as the skies are clear giving stunning views of the Himalayan peaks.

Arrivals from China soared 55 percent to 12,947 individuals in September. The number of tourists from Sri Lanka surged to 8,807 in September, up 57.1 percent compared to same period last year.

The European markets generated 66.3 percent more visitors in September this year. Arrivals from Germany and France swelled 30.9 percent and 19 percent respectively. However, Australia and New Zealand witnessed a decline of 9 percent and 4 percent compared to the 2017 figure. The number of visitors from the US and Canada also dropped 9 percent and 2 percent respectively in September. Deepak Raj Joshi, chief executive officer of the NTB, attributed the healthy growth in tourist arrivals to intense promotional activities. According to Joshi, the national tourism promotional body and the private sector vigorously promoted Nepal at different conferences, conventions and marts.

Arrivals to Nepal hit a new record in 2017 but remained short of the much-ballyhooed target of 1 million individuals as national elections in November and December resulted in weaker-than-expected growth. The country received 940,218 tourists last year, up 24.86 percent from 2016. The figure includes overland travelers. Nepal earned a record Rs 67.09 billion in foreign exchange from the tourism industry in the last fiscal year 2017-18.