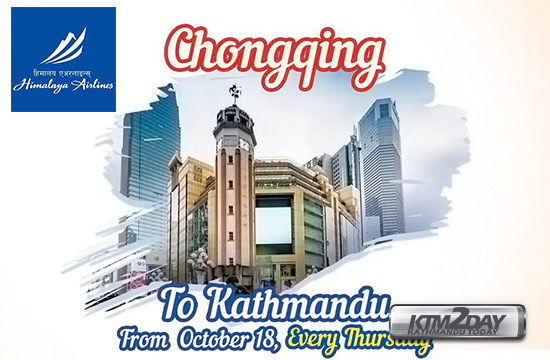 Himalaya Airlines, an international air carrier, entered into to the China market with the maiden flight to its latest destination, Chongqing, a major tourist city of the People’s Republic of China. The new service is an every-Thursday charter service from Chongqing to Kathmandu;Himalaya is the only airline operating direct flights between the two cities.

“China is one of our target markets. We are excited to expand our footprints there, allowing us to provide greater options for business and leisure travellers. We are proud to be the first and only airline to offer direct service from Chongqing, China to Kathmandu. We are confident that this route will boost passenger traffic as we expect a good demand from Chongqing, which has a sizeable population of affluent out-bound travelers. H9 will be instrumental in bringing more Chinese tourists to Nepal and helping the tourism economy of both countries.,”said Mr. Vijay Shrestha, Vice President – Administration.

Chongqing, one of the five centrally administered municipalities in China along with Beijing, Shanghai, Guangzhou and Tianjin offers remarkable attractions to visitors. Chongqing known for its rich history and cultural heritage, serves as an economic and manufacturing center apart from being the transportation hub for Southwest China.

China has placed Nepal as a new leisure destination, which is one of the driving reasons for increased Chinese visitors into Nepal over the past two years.The number of Chinese travelling to Nepal has grown tremendously after the country suffered a severe earthquake in 2015 followed by the border blockade that kept the tourists away.China is presently the second largest tourist arrival market for Nepal with 109,497 visitors for 2018 (Jan to Sept) showing the growth of 48.8% over the same period of 2017. This is an exponential growth, as China now holds 2nd ranking after India with its share of 14.17 % in the total tourist arrivals till September. With this CKG-KTM connectivity, H9 thus expects to contribute its own share to tourism economy of Nepal in a big way.

Additionally the airline plans to extend its focus on China connectivity by adding up other cities like Beijing, Haikou, Nanchang, etc in the next phase.