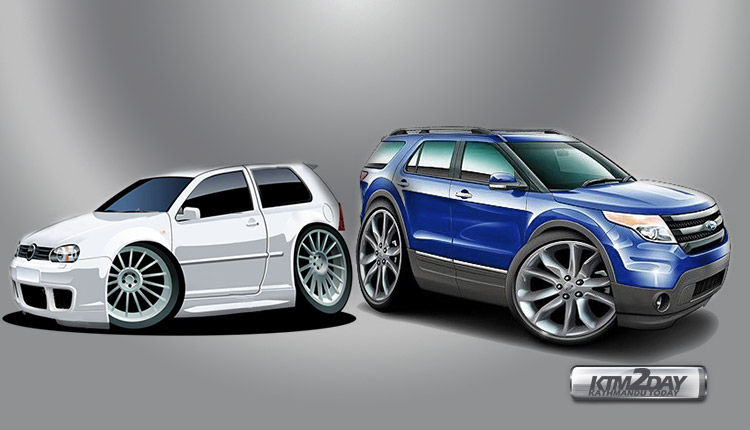 Car buyers are gradually gravitating towards sports utility vehicles (SUVs) in Nepal, following a similar trend in the global market. In just three years, SUVs have managed to gain nearly half of the market share.

According to domestic automobile dealers, hatchback vehicles used to be king in Nepal, holding the lion’s share of the market at nearly 85 percent. But customer trends have been shifting, with SUVs now the preferred choice for many customers and command 50 percent of the market with hatchbacks at 40 percent.

Sales of sedans are almost non-existent as a hatchback offers more features such bigger cargo space and stylish looks compared to a sedan. Globally, the trend has been shifting towards SUVs compared to other passenger vehicle segments. SUVs are known for its powerful engine, sporty features, and trendy looks.

Customers are looking at mainly three things while buying a vehicle — brand and premium, safety and security along with the infotainment system, said Ramesh Danekhu, assistant manager, corporate communications and marketing at MAW Enterprises. Due to the high ground clearance and off-road features, SUVs are considered suitable to tackle the geographical terrain of Nepal.

Although the trend is shifting towards SUVs, first time car buyers are opting to buy hatchbacks instead before upgrading to a SUV in the future, said automobile dealers.

Hatchbacks have been gaining popularity among Nepali customers due to its practicality. The major reasons for the immense attraction towards hatchbacks are due to affordability and easy driving said automobile dealers.

Balami said that hatchback vehicles have become the preferred car choice for middle-income people. Most people in the 18-25 age bracket opt for an affordable hatchback due to their middle-income status, said Balami. It is also the primary choice for many first-time buyers thinking of owning a vehicle, he said.

Similarly, the Department of Transportation Management registered 14,452 car, jeep, and vans in the fiscal year 2017-18 just in the Bagmati zone while the country wide total reached 24,338.