Nubia Red Magic Mars was launched last month with upto 10 GB of RAM has now launched the special edition of the handset. Dubbed as RNG Edition to honor the Chinese eGamer Team Royal Never Give up(RNG), the smartphone comes with signatures of the RNG team members on the rear panel.

Nubia is one of many smartphone manufacturers who make handsets that appeal to mobile gamers.

The Nubia Red Magic Mars RNG Edition comes in two variants of RAM – one with 8GB and the another with 10 GB.

The Nubia Red Magic Mars RNG Edition features specifications almost identical to those of the Nubia Red Mars. It features a 6-inch Full HD+ screen with an 18:9 display aspect ratio and runs Red Magic OS 1.6, which is based upon Android 9.0 Pie. 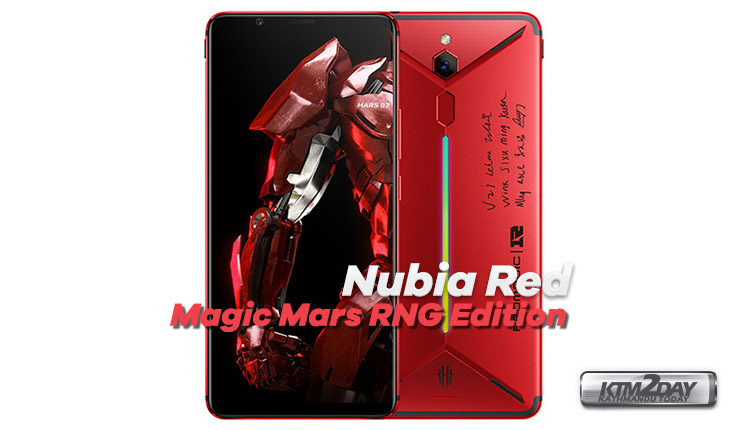 The phone is powered by the octa-core Qualcomm Snapdragon 845 SoC and as mentioned above, comes in 8GB and 10GB RAM versions, with the option to select from 128GB and 256GB of internal storage. The device is backed by a 3,800mAh battery that supports fast charging. In terms of optics, the Nubia Red Magic Mars RNG Edition comes equipped with a 16MP single rear camera with an f/1.8 aperture and phase detection autofocus (PDAF). On the front is an 8MP sensor with f/2.0 aperture. Additional features of the phone include a DTS 7.1 channel with 3D surround sound, and an RGB LED strip on the back panel. Additionally, the device sports liquid and air cooling technology, which is said to keep the temperature in check while gaming.