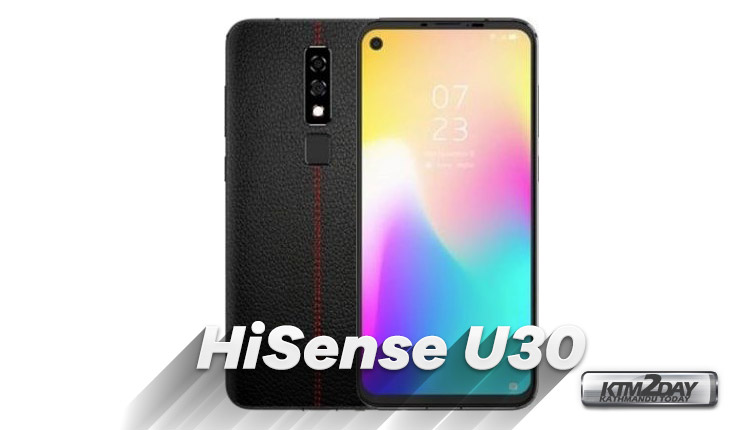 The Chinese company Hisense, better known for TVs and refrigerators, unveiled a smartphone in the CES 2019 show with the model Hisense U30.

The device combines all the current design trends with a in-display-hole camera on the front and the rear camera with a whopping 48 Megapixel paired with the latest Snapdragon 675 SoC.

HiSense U30 is the new smartphone announced at CES 2019 in Las Vegas featuring a display hole camera in style of Huawei Nova 4 , Samsung Galaxy A8s and Honor View 20, where the front selfie camera is located .

Made with an aluminum body with cowhide trim in the back, HiSense U30 is equipped with a “6.3-inch” Infinity-O display with FHD + resolution , Octa-core SoC Qualcomm Snapdragon SM61560 , 6 / 8GB of RAM , 128GB of internal storage and a 4500 mAh battery with support for Quick Charge Quick Charge 4.0.

The display is diagonal 6.3 inches with a resolution of 1080×2340 pixels for the device made by Tianma. That is, it is definitely not the same as in the Samsung Galaxy A8s smartphone , although it looks like it does.

The rear camera is a 48-megapixel sensor (as it turned out, the Samsung ISOCELL GM1 is the same as in Redmi Note 7 ) in a company with an additional 5-megapixel. 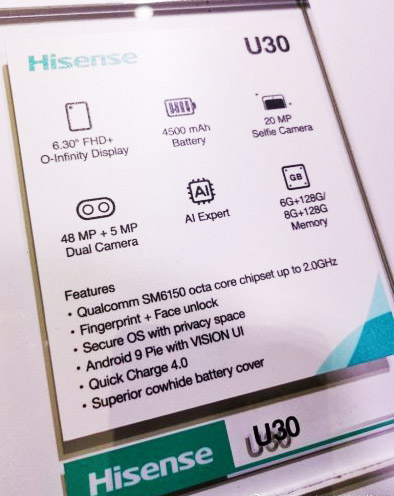 There is also a very decent battery of 4500 mAh with support for fast charging of the new generation of Quick charge 4.0.

According to a spokesperson from Qualcomm, the SM61560 would refer to the code name of the new Qualcomm Snapdragon 675 . The remaining technical features include a dual rear camera with a 48MP Samsung main sensor and a 5MP secondary. The front camera is a 20MP selfie-shooter.

All this magnificence is enclosed in a very controversial-looking case “a cowhide leather”. Hisense hasn’t  announced the price tag yet, but promised that Hisense U30 will arrive in the Chinese and European markets in March of this year.