Nepal Entrepreneurship Summit 2019 in the Capital on Feb 14 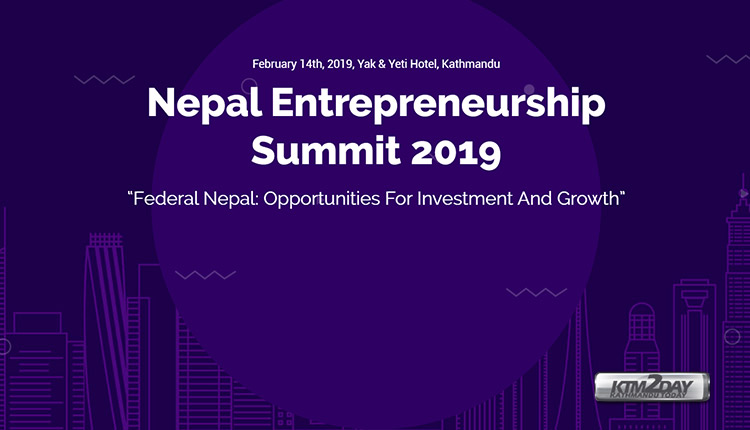 The Confederation of Nepalese Industries (CNI), in association with various government agencies and the private sector, is hosting the Nepal Entrepreneurship Summit 2019 in the Capital on February 14.

At a press conference held today, CNI informed that necessary preparations have been completed to host the event in a successful manner.

Being organised with the theme of ‘Federal Nepal: Opportunities for Investment and Growth’, CNI President Hari Bhakta Sharma, informed that the summit primarily aims at boosting entrepreneurship at the local level and at the national level in general.

“Growth of entrepreneurship plays an important role in the economic growth and overall development of the country.

Thus, entrepreneurship should be promoted at the local level itself,” said Sharma.

The Confederation of Nepalese Industries informed that the event will be crucial in identifying different problems for entrepreneurship development and finding out possible ways to tackle them. As the summit will have participation of high-level government dignitaries including Co-chairperson of the Nepal Communist Party (NCP) and former prime minister Pushpa Kamal Dahal, the organisers said that the event will make it easy for the government to develop a roadmap of entrepreneurship development and also address some of the key entrepreneurship issues through policies.

According to CNI, government authorities of all seven provinces will present the current state of entrepreneurship in their respective provinces along with entrepreneurial opportunities.

“This will help the government to formulate necessary policies to encourage entrepreneurship at the local level,”

Similarly, Confederation of Nepalese Industries informed that the summit is also being organised to encourage Nepali people working abroad to return home and become an entrepreneur.

Likewise, the event will also have discussions and deliberations on entrepreneurship issues from experts in the field, as per the organisers.