Nepal gets 91,793 tourist arrivals in January 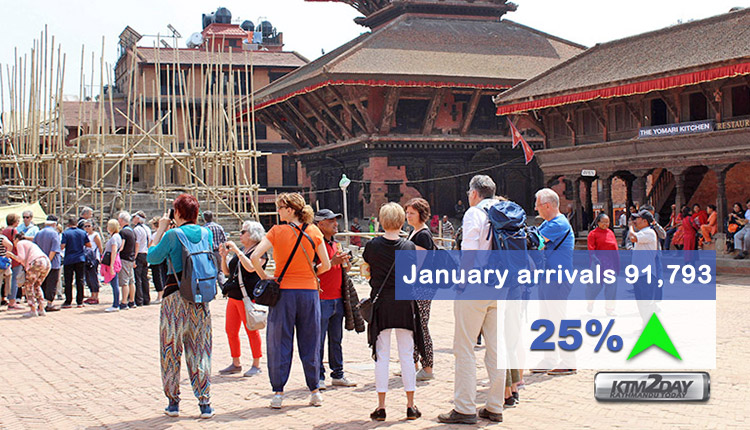 The year 2019 has begun with a very encouraging growth trend in tourist arrivals to Nepal.

According to Nepal Tourism Board, 77,300 international visitors came by air and 14,493 came overland to Nepal in January. In aggregate, a total of 91,793 visitors came to the country, a cumulative increase of 25.4 per cent over the same month last year.

Number of visitors from Thailand, Japan and South Korea also increased significantly by 69.8 per cent, 38 per cent and 8.4 per cent, respectively in comparison to the figures of the corresponding month last year.

Total number of visitors from the US in January reached 7,028, an increase of 28.1 per cent over the figures of January last year. The number of Australian visitors to Nepal also grew by 31.3 per cent to 3,527.

Deepak Raj Joshi, chief executive officer of NTB, mentioned that growth in international visitor arrivals in the very outset of 2019 was possible because Nepal has continuously spread a positive message internationally.

“This growth has encouraged us to work even harder to harness the strengths of both public and private sector in the days to come,” he added.