Samsung Galaxy A20e launched with smaller display and battery than A20 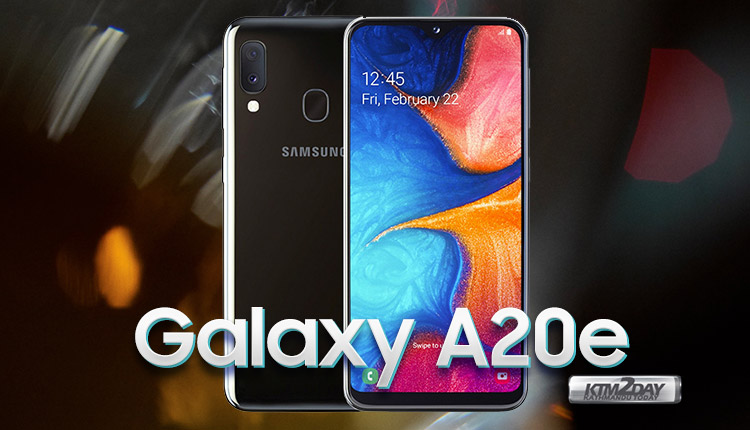 Samsung recently announced the Galaxy A80 with a rotating camera which acts both as a selfie and a rear camera. The feature was originally rumoured to be that of Galaxy A90 but later turned out to be a different story.

The Korean manufacturer hosted with quite a fanfare, the unveiling event of the Galaxy A80 but on the other hand quietly launched the  previously rumoured A20e model. Just like the S10e version the A20e belongs to a toned down version of the Galaxy A20.

The Galaxy A20e doesn’t have that bells and whistles attached as its older sibling the Galaxy A20 but matches the design aesthetics of the Galaxy A20, sporting a one-piece plastic build along with a traditional fingerprint sensor at the back.

The Galaxy A20e comes with the octa-core Exynos 7884 SoC that’s also powers the Galaxy A20.

The Samsung Galaxy A20e features a 5.8-inch HD+ (720×1560 pixels) TFT Infinity-V Display panel. This is notably smaller than the 6.4-inch Super AMOLED panel featured on the Galaxy A20.

Much like the A20, the A20e rear has a plasticy feel to it and Samsung calls it “Glasstic” design hinting that it’s a combination of plastic and glass.

Under the hood, the Galaxy A20e has an Exynos 7884 SoC, coupled with 3GB of RAM. The phone also has 32GB inbuilt storage that is expandable via microSD card.

The phone also packs a 3,000mAh battery that supports 15W fast charging technology so as to allow for shorter charging time. It boots Android 9 out of the box and will hit the shelves at a later date in n Black and White options only.

The Galaxy A20e stacks below the A20 hence will carry a cheaper price tag which will be unveiled soon in Poland .

Difference from Galaxy A20

The Galaxy A20e first of all has a smaller screen than the A20. The screen size is reduced from 6.4 inch to 5.84 inch. The AMOLED panel is also downgraded to LCD panel on the A20e.

Apart from these subtle difference in display screen and battery size, the A20e matches to the rest of the specs contained in the Galaxy A20.