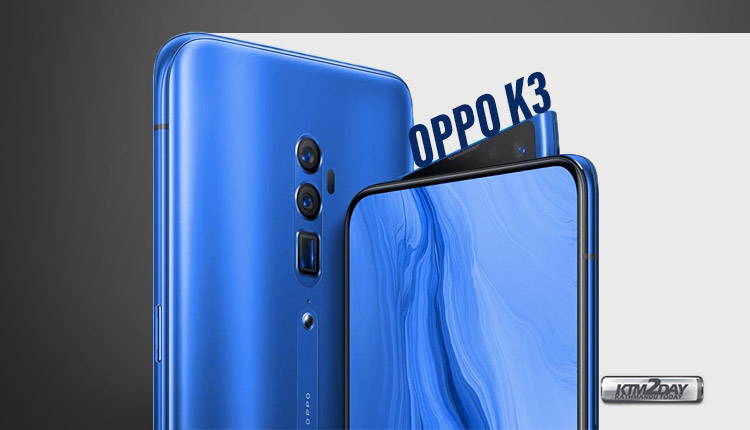 Oppo has been agressively launching new smartphones lately as the sales of new devices has started to plummet in recent times. Major manufacturers like Samsung, Huawei and Apple all report a decline in sales figure in the past year.

But the urge to keep pushing new devices to the market in hope of correcting sales figures is what drives them forward.

In the same scenario, Oppo has been launching new Reno flagship smartphone lately in European market to cash in on the 5G movement. The new Reno smartphones are Oppo’s first 5G capable commercial handsets currently available in Switzerland on the first lot.

The Reno Series are expensive and so cannot be marketed in emerging markets like in most Asian countries. Hence, Oppo has decided to launch new products based on the concept design of Reno flagship phones. The design and few innovative features are put together in the upcoming mid-range device named Oppo K3.

The Oppo K3 is a successor of Oppo K1 launched last year and is tipped to come with a in-display fingerprint scanner and Reno series signature camera design- also known as side-swing camera or shark-fin camera for selfies. It will also bring along the 20 Watt VOOC 3.0 fast charging technology.

According to the recent leaks that surfaced on the internet from Chinese social-media site Weibo, the Oppo K3 will come equipped with a 6.5-inch display with a resolution of 1080×2340 pixels. The phone is tipped to sport an in-display fingerprint sensor, which serves an indication that the panel will be AMOLED type, just like the one on the Oppo K1. The Oppo K3 will reportedly be powered by the Snapdragon 710 SoC, which marks a significant upgrade over the Snapdragon 660 ticking at the heart of the Oppo K1.

The Oppo K3 is said to come two variants with 6GB and 8GB of RAM, paired with 128GB of internal storage. The upcoming Oppo phone is tipped to sport a 16-megapixel front camera housed within a side-swing pop-up module.

On the back, the Oppo K3 might pack a 16-megapixel primary camera assisted by a 2-megapixel secondary camera. But there is no information regarding aperture, pixel size, or any other camera details.