Rumors and official teasers hinting at the imminent release of Oneplus TV has been circulating since last year. Now another official confirmation from the organization Bluetooth SIG has come with a information relating to a certified remote control for OnePlus TV.

The Bluetooth Special Interest Group (Bluetooth SIG) is the standards organisation that oversees the development of Bluetooth standards and the licensing of the Bluetooth technologies and trademarks to manufacturers.

The certification of Oneplus TV remote control from Bluetooth SIG has leaked on the web and shows that the OnePlus remote control with model number RC-001A supports Bluetooth 4.2. No further details about the device is included in this report. 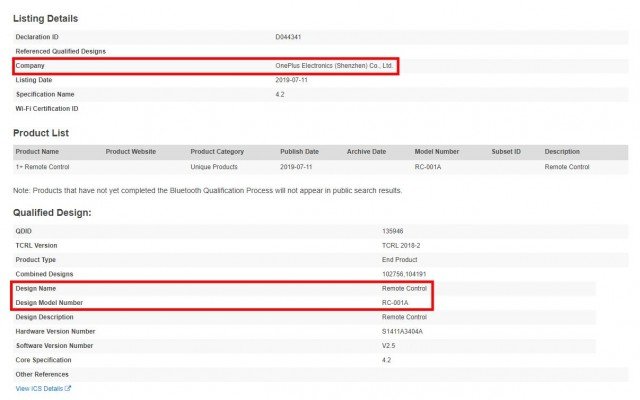 Have some good news for you all: The OnePlus TV is not very far away, at least according to one source. The launch might be soon, so stay tuned. I have very high expectations from it, what about you? #OnePlus #OnePlusTV ? pic.twitter.com/qzCJnfozi4

According to recent leaks, OnePlus TV will receive a 4K HDR panel, a voice assistant like Google Assistant, which allows you to do without a remote control.

To reduce the cost, it is planned to use LCD matrix instead of expensive OLED panels.

The OnePlus TV will have greater connectivity to smartphones and some kind of artificial intelligence built in. This further signifies that it will be based on Android TV platform .

Also, OnePlus does not position the device as a TV, but rather as a smart speaker with a large screen, so a good sound should be inherent to the new product.