Huawei introduced the latest Kirin 990 chipset – the heart of the Huawei and Honor flagship smartphones for the coming year.

It is important to note that the Kirin 990 is launched in two versions, and the basic one is described above. There is also a SoC Kirin 990 5G, which includes a Balong 5000 5G modem. And it is integrated modem onto the chipset, and not an external one. And although the Kirin 990 5G is not the first such SoC among the presented ones, it seems to be the first among those that appear in serial devices. 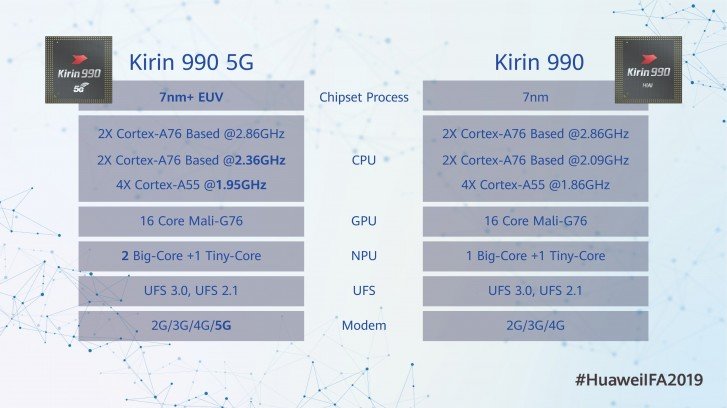 Interestingly, the Kirin 990 5G differs from the regular version not only in the modem. Firstly, this chipset is manufactured using the 7nm + EUV process technology. Secondly, the frequency of the second processor cluster with Cortex-A76 cores are increased to 2.36 GHz, and the cluster with Cortex-A55 cores are increased to 1.95 GHz. But that is not all. This platform also has a more productive NPU: it contains two large cores and one small one. This platform consists of 10.3 billion transistors, while the regular version of Kirin 990 – of 8 billion. 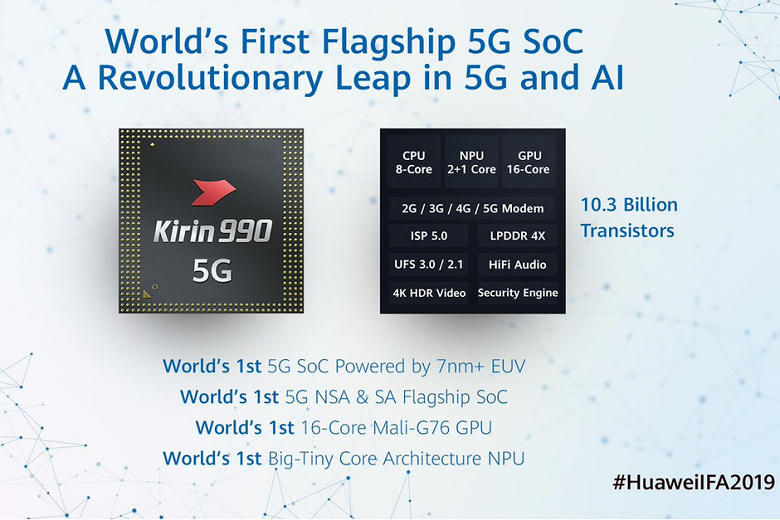 Huawei claims that the performance of the Kirin 990 5G is higher than that of the Snapdragon 855. In particular, in Geekbench, the new product is 9-10% faster than its competitor, the GPU is faster than 6%, and its energy efficiency is 20% better. As for the 5G modem, it claims speeds of 2.3 GB/s for downloading and 1.25 GB/s for uploads.

Probably, the first smartphone with such a SoC will be some kind of separate modification in the Mate 30 line, and by the end of the year we are also promised of the Honor V30 5G.