To provide users with a more modern experience, Apple has included 5G connection and the A15 Bionic chip in the iPhone SE (2022). In contrast, the prior model included 4G capabilities and an A13 Bionic processor. The rear camera on the iPhone SE (2022) has also been upgraded. While the hardware has been improved, the new iPhone SE has the same aesthetic as the first model, which was unveiled nearly two years ago.

A new version of the iPhone SE will be released with iOS 15. 326ppi of pixel density and 625nits of peak brightness are provided by the 4.7-inch Retina HD display, which has a resolution of 750×1,334 pixels. The display on the iPhone SE (2022) appears to be a carbon copy of the one on the previous iPhone SE model in terms of appearance. However, Apple claims that both the front and back of the new iPhone SE are made of the “toughest glass in a smartphone. iPhone 13 and iPhone 13 Pro users will be pleased to know that their screen protectors are identical to those found on the iPhone 13. IP67-certified construction is also included in the new model.

iPhone SE (2022) is powered by Apple’s A15 Bionic technology, which is also found on the iPhone 13 series. The A15 Bionic chip in the new iPhone SE is said to provide up to 1.8 times the CPU performance of the iPhone 8 compared to that device. Live Text is one of the many services it offers.

Like the previous iPhone SE, the new iPhone has a single 12-megapixel rear camera sensor with an f/1.8 wide-angle lens. However, the camera’s rear sensor has been upgraded, featuring a better visual processing.

This year’s iPhone SE (2022) has a rear-facing camera that supports technologies including Deep Fusion, Smart HDR 4, and Photographic Styles. It can also capture 4K video at a frame rate of up to 60 frames per second. As an additional layer of defence, the camera’s lenses are shielded by sapphire crystal covers.

The iPhone SE (2022) has a 7-megapixel front-facing camera with an f/2.2 lens for selfies and video calls. Portrait Lighting is supported by the selfie camera and has six effects: Natural, Studio, Contour, Stage, Stage Mono, and High-Key Mono (a monochrome version of Stage). Also included are Deep Fusion, Smart HDR 4 for photographs, and Photographic Styles for editing.

5G, 4G VoLTE, Wi-Fi 5, Bluetooth v5, GPS/A-GPS, NFC, and a Lightning port are included in the iPhone SE (2022). There are accelerometers, ambient light sensors, gyroscopes, and a proximity sensor on the device.

The iPhone SE (2022) has a Touch ID button that features a fingerprint sensor for biometric authentication, just like the previous model. An “all-day battery life” is claimed for the new iPhone SE. iPhone SE (2022)’s built-in battery, according to Apple, is capable of storing a full day’s worth of audio and video on a single charge. However, the iPhone SE (2020) was rated to have a battery life of up to 13 hours of movie playback and 40 hours of music playback time.

Now you can wirelessly charge your new iPhone SE utilising the Qi standard. It also has a wired charging speed of 20W. However, the retail box does not include a charger that is compatible with the device. 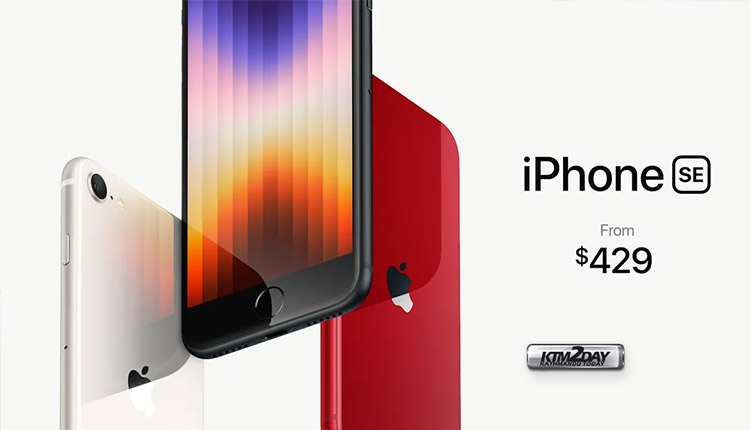 iPhone SE (2022) has been launched in Nepali market today and is available in single configuration of 128 GB storage space at a price tag of Rs 87,000.