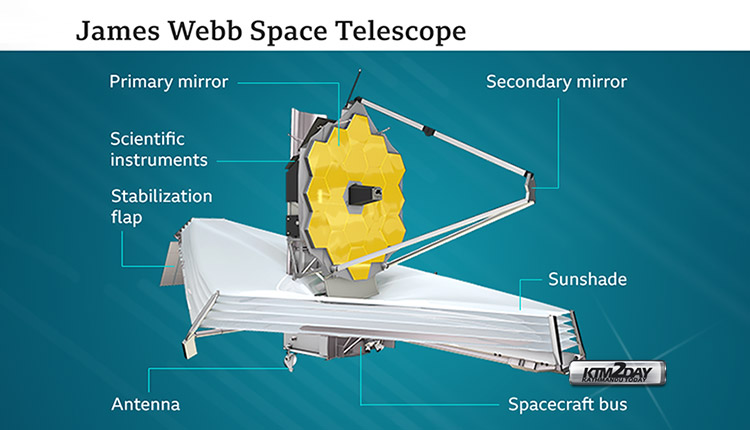 NASA’s most powerful telescope blasted off into orbit on Saturday, heading to an outpost 1.5 million kilometers (930,000 miles) away from Earth after repeated delays due to technical issues.
The Ariane 5 rocket carrying the James Webb Space Telescope lifted out from the Kourou Space Center in French Guiana on Sunday.

One month is the estimated time it will take it to get to its remote location.

Astronomers hope it will shed light on the origins of our universe and Earth-like planets outside our solar system.

Following in the footsteps of the venerable Hubble, the Webb space telescope is named for a former NASA director and aims to show us what the universe was like just 14 billion years ago.

John Mather, a co-founder of the Webb project, discussed the telescope’s remarkable sensitivity on social media.

According to him, “#JWST can see the heat signature of a bumblebee at the distance of the Moon”.

There is a lot of power required to detect the faint glow that initial galaxies and stars produced billions of years ago.

The telescope is the largest and most complicated in the world. With three times the diameter of the Hubble’s mirror, it has a 6.5-metre (21-foot) diameter and is made up of 18 hexagonal pieces.

In order to fit it into the rocket, it was folded. And in order to prevent particles or even human breath from coming into touch with the telescope’s mirrors, NASA used lasers to steer the maneuver.

As soon as the rockets have travelled 120 kilometers, Webb’s craft’s “fairing” is removed to reduce the weight.

Arianespace, the company that built the rocket, devised a special decompression system to safeguard the sensitive instrument from pressure changes at that point.

27 minutes after launch, the ground crew will know if the first stage of the mission was successful.

A tennis-court-sized sun shield and a mirror will be deployed once the spacecraft arrives at its destination.

If Webb is to function properly, that dauntingly intricate process must be completed in two weeks.

It will have a significantly greater distance from the Earth than Hubble, which has been in orbit since 1990.

According to NASA, the Lagrange 2 point was chosen as Webb’s orbital location in part because it ensures that all three planets will be in close proximity to one other.

In June, Webb is anticipated to enter into service.