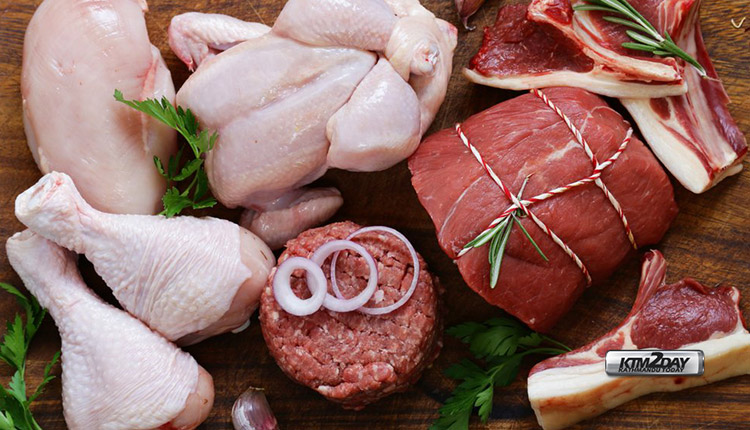 The price of chicken meat, which was sold at Rs 450 per kg a month ago, is now being sold at Rs 345 per kg, said Jung Bahadur BC, president of the Poultry Entrepreneurs’ Association.

He said that the price has come down due to the recent production of more chickens than the demand. “There is a lot of production now. It is natural for prices to fall as production increases, ‘he said.

“It’s more than a hundred drops in a month,” he said.

Sept 26, 2021 – Meat traders have started fixing the price of goat and goat meat for Dashain festival. Entrepreneurs have said that the price has been fixed to bring uniformity rather than taking arbitrary price during the occasion of the festival.

The price of goat meat with intestines is fixed at Rs. 1000 per kg, meat with fat at Rs 1200 and the shoulder and ribs part at Rs 1300 including the customer’s selection.

Similarly, the price of chicken meat has been fixed at Rs 300 per kg and that of buff and pork at Rs 500 each per kg.

“We have already instructed the association to post the price list for all the meat shops to implement the fixed price. If the meat is not sold and distributed according to the fixed price, action will be taken by the union, ”he said.

Consumption of chicken and pork meat has been less in Dashain than other times. According to Khadgi, there will be no change in the price of khasi, boka and ranga during the Dashain festival, even if the price of meat will go down. On September 22, the Department of Commerce, Supplies and Consumer Protection had directed to pay attention to the quality, price and hygiene of meat for decades.

Discussing with the meat traders, the department has requested to bring uniformity in price along with quality. The price of indigenous sheep is set to double this year as it is not imported from China. Entrepreneurs have increased prices saying that production is low and demand is high in Mustang.

Chairman Khadgi said that the price of sheep will increase this year as compared to last year. Chyangra has not come from China. Entrepreneurs have been increasing the price arbitrarily as there is a shortage of Chyangra produced in the country.

According to Deepak Thapa, head of the Nepal Four-legged Purchase, Sale and Agriculture Farm Group, the country has imported enough goats. He stated that the dealers had already brought the requisite goats, so there would be no meat shortage during Dashain.

Chairman Thapa claims that this year’s pricing has more than doubled from last year’s. Only approximately 4,000 of the 7,000 sheep that were sold in the Kathmandu Valley last year are expected to be sold this year, according to estimates.