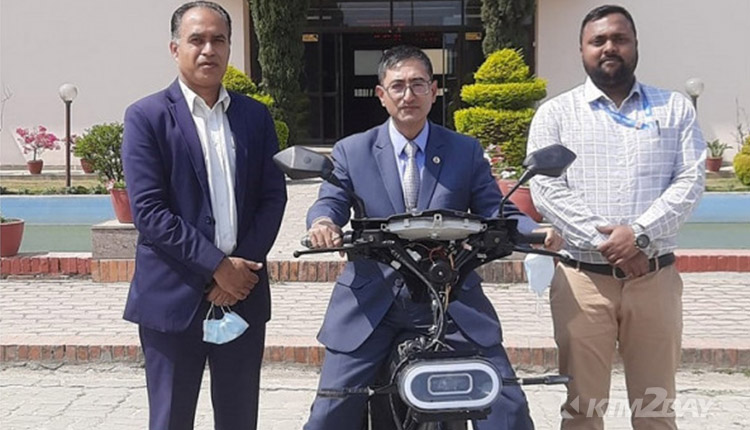 According to the price set by the Nepal Oil Corporation, the current price of a liter of petrol is Rs 160. Prices of petroleum products have been rising steadily in the international market.

The Nepal Academy of Science and Technology (NAST) has after long research developed an electric scooter suitable for Nepal’s roads.

The foundation has paved the way for those who want to produce scooters by setting up a factory.

Dr. Sunil Babu Shrestha, Vice-Chancellor of the Electric Scooter Foundation and Bamdev Chhetri, Vice-Chairman of the Planning Commission of Lumbini have already tested the electric scooters.

The foundation has already informed the Ministry of Energy, Water Resources and Irrigation about the scooter. It is scheduled to be inaugurated in the presence of Energy Minister Pampha Bhusal in a few days.

In the international market, electric vehicles with a riding range of 1000 kms have become available on a single charge. Both China and India have made great strides in the manufacture of electric vehicles.

Various models of electric vehicles have started plying on the roads of Nepal. If the price of petroleum products continues to rise, consumers will be forced to look for alternatives.

According to Rabindra Dhakal, Head of Technology of the Foundation and Head of Electric Scooter Manufacturing Program, a model suitable for Nepali geography has been developed.

The institute has recently built a prototype. The foundation is also conducting a feasibility study on what kind of technical and financial preparations should be made while setting up a factory in Nepal. The Lumbini state government is providing full support on this matter.

A laboratory for electric scooters has been constructed in the premises of the establishment. Dhakal informed that preparations are being made to name the new scooter ‘Sarathi’.

Manpower has also been prepared with the objective of providing support for production in Nepal. The institute has released the test results of the past seven months along with the necessary studies.

The foundation has spent more than Rs 300,000 in making the electric scooter. When it comes to mass production, electric scooters can be made in Nepal for a minimum of Rs 150,000 to Rs 200,000. Since all the goods have to be imported from abroad, the establishment understands that it will be a bit expensive.

The scooter currently manufactured by the foundation has a 2 kilowatt capacity lithium ion battery. The scooter can travel up to 50 kilometers on a single charge. According to Dhakal, as the capacity of batteries and motors is increased, more range can be achieved.

In particular, the problem of batteries used in most electric vehicles has been identified. Lead cell batteries are being researched in Nepal. The Foundation is providing technical and academic assistance in this regard.

Charging stations need to be built everywhere to promote the use of electric vehicles. The Nepal Electricity Authority (NEA) has said that 50 charging stations will be constructed in the first phase across the country but no concrete progress has been made so far. Similarly, Hyundai is constructing 40 charging stations from the private sector.

NEA has also reduced electricity tariff for charging electric vehicles. Charging at night is even cheaper. However, not all charging stations have been built. Scooters, motorcycles can be charged at home.

The private sector is constructing charging stations in Kathmandu Valley on its own initiative. It needs to be further expanded. Although NEA has put forward various plans to increase electricity consumption internally, due to some legal complications, progress has not been as expected.

Dhakal, who is also a senior scientist at the institute, said that the government and the industrialists should work for a common vision for the construction and use of electric vehicles in the country. He says that you have to take some risk for the new job. The foundation has also developed technology to start motorcycles from a mobile app.

Consumption of petroleum products has to be gradually reduced. On the one hand, the environmental risk is increasing and on the other hand, huge amount of money has gone abroad.